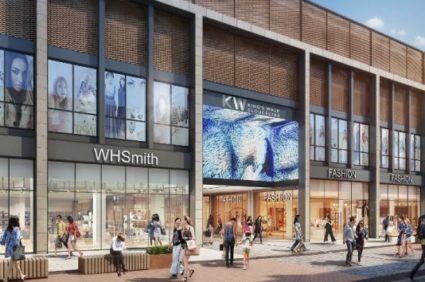 Plans for the next stage of Gloucester’s £85m Kings Quarter transformation look set to move forward.

Set to be considered by Gloucester City Council’s planning committee next week, the proposal has secured a recommendation for outline and listed building consent.

The proposals include a new car park, homes, a hotel and 40,000 sq ft of new office space in the heart of the city. The West England Development Conference will reveal more details of the scheme

The redevelopment also includes a transformation of Kings Square as part of the revitalisation of the city centre which includes a new bus station, improvements to King’s Walk car park and the demolition of Bruton Way Car Park.

The application, submitted by Gloucester City Council, is a major step towards achieving a vision of a new destination combining regular cultural activities and live performances with an improved leisure and commercial offer alongside hub for creative businesses and start-ups.

“Kings Quarter presents a once in a lifetime opportunity to transform and reinvigorate a critical part of our city,” said councillor Richard Cook, leader of Gloucester City Council.

“An important part of this change is to re-establish Kings Square as the city centre’s largest public open space, and we want to make it a major focal point for businesses, residents and visitors.

“The people of Gloucester have waited a long time for this redevelopment and what is set to be a total transformation of this part of the city centre.”

Michael Grubb Studio, the creative vision behind  projects such as the Queen Elizabeth Olympic Park and Twickenham Stadium Gateways, has been working as part of a dedicated design team to create lighting to brighten the area and protect its newly welcoming atmosphere into the evening.

The sculptural edge of the square has been designed by George King Architects (GKA) whose founder hails from Gloucester.

Work to Kings Square is expected to begin in earnest after Easter with completion expected in the first quarter of 2021.