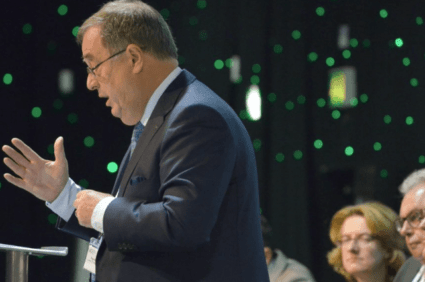 Leeds is not doing enough to attract professional services firms seeking to relocate operations from London, the chairman of one of the world’s leading law firms has told Built Environment Networking’s West Yorkshire Economic Growth conference.

Global chairman of Eversheds, Paul Smith, told the keynote session at the event that legal companies were seeking to ‘northshore’ activities due to the increasingly unaffordability of labour and property in the capital.

“Pressures in the legal sector are growing There are opportunities here to bring legal work to the region.”

However he said that Manchester has hijacked the northern powerhouse

“For most people the northern powerhouse means Manchester alone and does not mean the north.”

“We haven’t set out our stall to take full advantage of the northshoring trend.”

“Chinese clients seems to only think of London and Manchester,” he said, adding that the Manchester United Football Club’s renown was very useful for disseminating the city’s brand around the world.

Paul Smith added that he was ‘saddened’ that Yorkshire’s devolution plans have not got off the ground yet.

However Cllr Susan Hinchcliffe, chair of the West Yorkshire Combined Authority, said that the region was making progress, pointing to how the Leeds city-region had risen from 15th in the league table inward investment to third.

And she said that she was a strong supporter of the One Yorkshire devolution deal.

“It will give a voice on the national and international stage, second only to London.”

Roger Marsh, chairman of the Leeds City Region local enterprise partnership, said that the north had a long way to go, pointing to figures showing the region as a whole suffers from a £45bn fiscal deficit.

Increasing Yorkshire’s output per head to the UK average would add £10bn to the size of the regional economy.

“We are on a journey to play our part about doing something so that the north is a solution to the national economic problem not the problem.”

The session also heard a presentation from Dr Aman Puri, general consul for India who pointed out that only 15% of Indian businesses’ UK operations are located in the north, while 45% are in London alone.