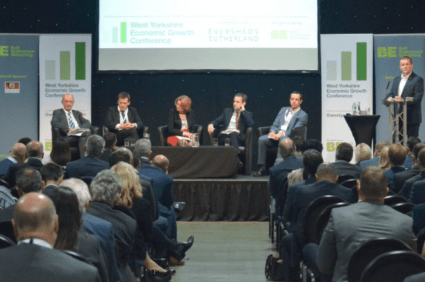 The government’s senior trade official in Yorkshire has expressed disappointment that the north of England has never successfully put forward the case for its own hub airport.

Mark Robson, Yorkshire & Humber regional director at the Department of International Trade, said that a shortage of direct air routes to overseas destination was holding back business in the north of England, forcing them to travel via Heathrow, even though the region could accommodate its own hub airport.

Speaking in the economic growth session at the West Yorkshire economic growth conference, he said: “We’ve got an opportunity to create a big hub here: we’ve got enough businesses and space to do that ourselves.

“It’s disappointing that when the arguments were going on about new runways in the south east, we couldn’t put together something about joining up the airports so people didn’t have to travel.”

Tom Riordan, chief executive of Leeds city council, said that the next transport challenge for was to prepare for the arrival of HS2 in the region by creating a package of integrated services.

He said, based on recent discussions with secretary of state for transport Chris Grayling and his officials, that the argument for investment in transport to improve the productivity of the northern economy had been won at Whitehall level.

However he said the next argument was about how it will be achieved, such as whether a new line is needed to connect Leeds and Manchester.

Riordan added that it was welcome that the £174m, which had been earmarked for developing the aborted Leeds trolley bus scheme, would be spent instead on projects like the city’s new park and ride and the new parkway station for Leeds-Bradford airport.

However he said that Leeds’ transport connectivity needed to improve.