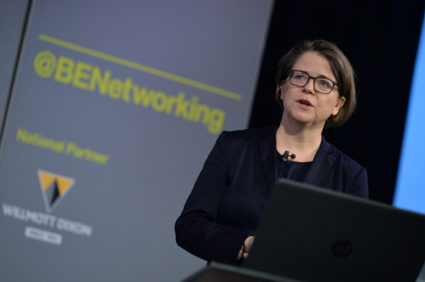 Tegel Airport in Berlin is about to be turned into a massive, smart city development, becoming Berlin’s innovative Urban Tech Republic, consisting of 5000-6000 apartments, along with smart energy systems.

Speaking at our Developing Cities for the Future Conference Beate Albert, Head of Unit at Smart Cities Berlin, described how Berlin came to embrace smart city concepts: “We started a little bit later than Amsterdam or Vienna and unlike them, Berlin is not a data driven so far. It’s very economic driven.”

In Berlin, the private sector led on developing smart technology.

Siemens for example is developing their largest industrial plant in the country at Siemensstadt into a smart district. They’re investing €600m into the scheme, which is due for completion by 2030 and will consist of 2750 housing units, as well as industrial and commercial space, all built to smart principles.

However, their plans for Tegel Airport are far more ambitious in scale, Albert explained: “This project is much bigger if you compare it with the size of Siemensstadt, which is 70-ha in size. The new Urban Tech Republic will cover 460-ha.”

There was also precursors to Berlin’s smart city boom, the city pioneered urban engagement through a 2008 referendum in the borough of Friedrichshain-Kreuzberg, over whether to protect the district’s fledgling Holzmarkt community and riverbank from commercial development. The referendum passed by 87% and it is now run by a cooperative. (check)

Smart technology is also being incorporated on a smaller scale, with CUBE, which has been developed by CA Immo Deutschland. CUBE is a commercial tower block due for completion in February 2020 where the developer is pioneering “smart working” through intelligent building systems. These systems will also account for requirements and preference and make extensive use of self-learning. The building will also allow for flexible reuse of space, to adapt to changing need.

The City of Lyon in central France has invested £340m into developing smart city projects. One such project is the Modélisation Urbaine Gerland (MUG), a platform to design the urban renewal of the Gerland district.

Cédric Grignard, Director of New Business & Innovation at Lyon, said: “The aim is to design a decision-making tool so we can simulate what kind of infrastructure we are going to build.”

They have employed smart city technology using sensors and apps to improve accessibility for disabled people.

Palmetshofer emphasised the importance of smart cities allowing citizens to have an input: “If you are a smart city you have to connect to the people living in the city, but every city struggles having a feedback loop system that works.”

Vienna introduced an issue management tool to allow residents to raise issues within the city, to establish a direct system of consultation. Palmetshofer said that “the understanding has to be that someone is a human being.”

Raising similar notions was Leonie Van Den Beuken, Programme Director of Amsterdam Smart City: “When we talk about smart cities people perceive it not so much as smart but as scary.”

The Amsterdam approach to smart cities differs from other European cities, Van Den Beuken explained: “We are this unique public-private partnership, it’s even including the public and the knowledge establishment.”

Van Den Bueken also remarked how smart cities could ease the transition from fossil fuels to clean alternatives, with smart technology being able to provide information where that energy is needed.

Misuse of data was also raised by the Programme Director, who gave an example that had diminished trust in the Netherlands: “The public sector has used water usage data to establish, or at least think they established, whether people were living together and because they were living together, they got their social welfare cut.”

Theo Blackwell, Chief Digital Officer of London warned against scaremongering around smart cities: “A lot of concerns about smart cities that is amplified in the press, usually has its origins in something that happened in the US, China or the Middle East, all of which have different privacy cultures.”

Blackwell particularly pointed to GDPR as being protective, as it switched the burden onto the state to respect people’s rights. He also pointed to how that model was being used as a gold standard elsewhere: “When you go to the US and see the codes they are putting down on cities, what they’re putting down is similar to GDPR.”

Smart city technology is transforming cities, neighbourhoods, buildings and ultimately, the people who live in that built environment. Data can be harnessed to improve the lives of the most vulnerable, but questions over privacy are still up in the air.