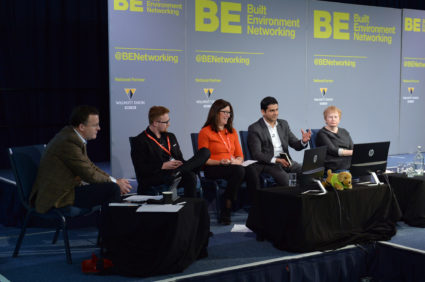 E:ON and the City of Malmö have been co-operating for over 25 years on several projects, and this partnership came to a head when they signed a “world’s first climate collaboration contract” along with local utilities firm VA SYD in 2011.

And this contract has changed the face of the city. The district of Hyllie will be completely fossil fuel free from this year.

“We’re actually at a point in history. We can work together and collaborate to make a real difference,” said Claire Harrold, Strategic Lead at E:ON. at the recent Developing Cities for the Future Conference.

With its UFO and futurist inspired architecture Hyllie looks very much like a vision of the future. It uses integrated heating, cooling, power and mobility systems, which are underpinned by a smart grid.

The entire city of Malmö is targeting 2025 for carbon neutrality, and along with cities such as Copenhagen they’re likely to be among the first wave of major cities to become carbon neutral.

Energy reuse has also been pioneered by E:ON, Harrold explained: “E:ON’s Ectogrid solution is a world’s first solution that takes its inspiration from ectothermic animals like lizards and snakes.”

It has been debuted at Medicon Village, a science park in Lund, and this has led to a 78% reduction in energy use.

In the UK they have cooperated with Berkeley Group on the Future Energy Home project piloted at Kidbrooke Village in London, which incorporates smart energy and lighting systems, along with EV charging and solar panels. This will allow Berkeley Group to achieve its aim of making its housing stock carbon neutral by 2030.

Project Etopia is an emerging producer of modular, carbon negative smart homes, bringing the homes of the future to today. They’re planning to build manufacturing facilities all over the country. They have created 47 homes in Corby as a test scheme, which achieved an air tightness 10 times that of best practice guidelines.

Chief Executive Joseph Daniels said: “Building one of our houses is like taking a car off the road for 36 years due to its energy positivity.”

The houses use solar cladding technology and solar tiles, which combined will create 80 KWh of energy according to Daniels. The firm has also made the superstructure quick to construct, where at another test scheme six builders Etopia trained in Namibia managed to construct one in just 3 hours.

Daniels also pointed at how energy sharing will provide a major reduction of waste: “We are looking at energy storage as a key point but also a key crutch, peer to peer is coming and it will change everything.”

Smart technology has the potential to revolutionise life for the elderly. Blackwood, a provider of later life accommodation, are integrating these systems on their new developments, through their CleverCogs programme allowing elderly people to control their environment through techniques like voice control which contact carers directly.

Fanchea Kelly, Chief Executive for the firm, described how this benefits the whole of society: “Part of the public value in including smart technology, is quite a lot of the people we deal with would otherwise need physical care, but they’d rather do it themselves. They can exercise more; they have more choice and more control over their lives for longer.”

Schneider Electric are a major manufacturer of energy and automation technology for building. Vice President of Digital Energy Pradyumna Pandit, who oversees the firms building business in the UK and Ireland, said: “We are looking at how we can leverage technology to show how we can take on one of the biggest challenges we all face as humanity.”

Heating control systems therefore provide a major opportunity to cut those emissions, Pandit said: “40% of the energy in buildings is used for heating or cooling, and we reckon about 25% of that is wasted.”

There are opportunities for smart technology to change the way we lead our later years, the buildings we live and work in, and transform our cities to take on the biggest challenge facing humanity.