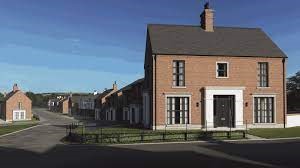 Antrim and Newtownabbey borough Council has approved plans for a major housing expansion in Antrim Town, which will see a total investment of £100m and the creation of up to 100 new jobs.

The reserved matters application will see 525 new homes, six local shops, public spaces and a play park being built along the north-east edge of the town, close to the Junction Retail Park.

The 26 hectare site is located on lands north, east and south of 14 Niblock Road, with a section of the site running along the railway line as far south as Stiles Way.

It will be comprised of 200 detached houses, 164 semi-detached, 77 townhouses and 84 apartments, built in several phases.

Welcoming the decision, Chair of the Planning Committee, Alderman Fraser Agnew said: “This huge expansion will transform Antrim for the better, acting as a catalyst for continued economic growth in the town.

“It is further proof of the confidence investors have in our Borough and will be welcome news for local businesses and suppliers.”

Mayor of Antrim and Newtownabbey Alderman Stephen Ross added:“This major development will help with the growing demand for housing in the area, particularly from first-time buyers.

“The development will be served by six new local shops, creating between 80-100 new retail jobs. It will also provide a major boost to the local construction industry, with the applicant indicating the scheme will create 70 jobs during the construction phase.”