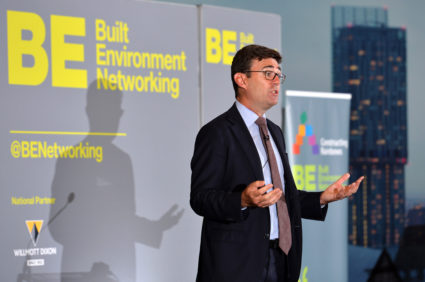 Social media has tipped Parliament over the edge, Mayor of Greater Manchester Andy Burnham told delegates at our Development Conference.

The Greater Manchester elected mayor, who was an MP until 2016, said: ““It was getting more and more dysfunctional with every year, like an old clock. Social media has disrupted many industries and it’s completely disrupted our political system, which can’t cope.

“Parliament just about worked before the era of social media. At that time people would work out positions on various issues and there was a collaborative spirit. Social media means people are taking very individual positions and now Parliament can’t make sense of it all.”

One of the reasons that the North has “never punched its weight” in Parliament is because the whipping system forces MPs to vote on party lines rather than for the interests of their regions, he said.

And the current system had resulted in a “really rough deal” for the north while leading to overheating in London and the south east, Burnham said. “One view of life has always predominated the London view and the civil service has always worked to that principle in terms of how it allocates resources.

“That’s how it has worked, and the Parliamentary system hasn’t looked after all areas equally. Change happens when both parties turn back with one voice on the civil service,” he said, expressing his “sadness” that there is little of the “genuine” cross party work that he had undertaken when shadow home secretary with his Conservative opposite number Theresa May on behalf of the Hillsborough disaster victims.

“That’s the exception rather than the rule,” Burnham said.

“The voice of the north has got louder.

“Whatever the final decision on Brexit, there has to be a reckoning about how all areas get a fair treatment. That moment is coming and coming quite quickly. The status quo is not doable anymore and Parliament has to give up a lot of its power.

“There is going to have to be a much more substantive policy reform regardless of Brexit. If there is a No Deal Brexit, the need to put confidence into the regional economy will be huge and we are best placed to pick up that challenge immediately.

“My job is to put us in the strongest possible position to benefit when that moment comes.”

And he said that devolution can be a unifying force because whatever ideological standpoint local politicians adopt, they have a shared commitment to their regions.

“The only thing in British politics that unites parties and across Remain and Leave is that everybody wants to see places having more control in their own hands: it’s the one unifier that we have got.”

As an example of the extra powers that should be devolved, Burnham said that Greater Manchester should have full control over its passenger rail network so that it can develop a fully integrated transport system.

Quizzed on a power he would like to have; he picked the London mayor’s ability to keep the roads moving by enforcing civil penalties for blocking yellow box junctions.

When questioned, the mayor defended his decision when first elected mayor to review the Greater Manchester Spatial Framework because of concerns that it would lead to loss of green belt land.

“Over the last two to three decades developers have been going for the easiest sites which happen to be alongside key motorways and not going to urban and suburban brownfield sites which are a bit more difficult,” he said, adding that this pattern of development had contributed to the decay of the conurbation’s town centres.

“Town centres are no longer the retail opportunities that they once were but are prime opportunities now to develop the higher density affordable housing people are calling for, which is more connected to the public transport infrastructure,” Burnham said, highlighting the launch on the previous day of the Stockport MDC.

He also said that more funding for retrofitting existing housing stock would enable Manchester to move “faster” on its target for the conurbation to be a net zero emissions conurbation by 2038, which would in turn help the UK to achieve its wider 2050 goal.

Burnham said: “Imagine the trade-off there will be. If we move faster, we will make it more likely that the UK will hit 2050.”

And he said that the city’s push to adopt net zero early would equip the city’s young people with low carbon skills, which will be in high demand in the rest of the UK.