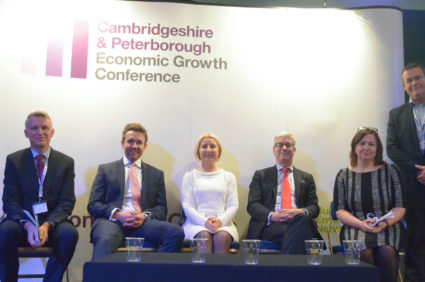 The Cambridge and Peterborough combined authority is pulling together some of the area’s top economic brains in an Economic Commission to help inform growth plans, a Built Environment Networking conference has heard.

Adam Poole, asset manager at British Land, warned that Cambridge must not be complacent about attracting investment.“If it doesn’t happen in Cambridge there are plenty of other places wanting investment. If you are not making positive decisions you are going backwards,” he said, pointing to how other city-regions like Manchester were adopting a very pro-active approach to development.

But he said that British Land was keen on Cambridge due to its ‘fundamentally strong’ economy, ‘positive jobs story’ and proximity to London, whilst adding that investors remained bullish about UK commercial property. “Investors are looking through the short-term noise and recognise that beyond that the UK is a pretty safe haven.” But he said that institutional investment regulations needed to be reformed to enable more cash to be pushed into growth areas like life sciences.

Rachel Stopard, chief executive of the Greater Cambridge Partnership said that the nature of investment in the area meant that it could be lost to the UK if the city failed to capture it post-Brexit. “If it’s not in this area, it may not be elsewhere in the UK but could be somewhere in Europe.

For more details on up and coming events, conferences and forums in the region click here, and for all events click here.