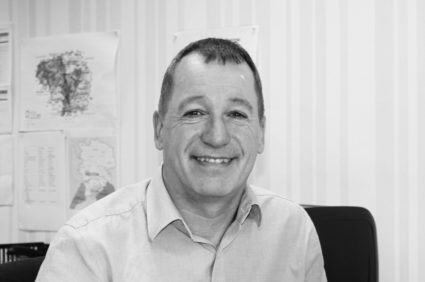 Ball & Berry – an expert in the built environment specialising in advice on all aspects of commercial and domestic building control – were one of our partners at our recent Birmingham event. Here we hear exclusively from their Regional Director Richard Cymler…

Tell us a little about Ball & Berry and the work you do?

We are Approved Inspectors, which means we provide advice on all aspects of commercial and domestic building control.

We assess plans that are submitted ahead of buildings being constructed; we consult with relevant statutory bodies – such as the Fire Service or Water Authority – throughout a build; we carry out site inspections at critical stages of work and issue certification upon completion. There’s much more to what we do – but that’s the nutshell version.

We have a 23-strong team working across offices in Birmingham, Preston and Manchester. Several members of our team are ex-Heads of Local Authority Building Control, but we specialise in a variety of sectors and work to any scale.

Building control services can be much a likeness, but our ability to embed ourselves in a project team is what sets us apart.

We get involved in a scheme at a much earlier stage than most Approved Inspectors, to help build confidence in our clients and overcome those initial challenges that arise with any construction project.

From there, we become intrinsic to the key decision making and delivery objectives of every building we’re assigned to, always making ourselves available to deliver the advice and support required to get a project over the line.

We consistently receive great feedback from our clients, who comment that they don’t have to go through layers of the team to reach their main contact and the technical experts – we are always one phone call away.

You’ve recently opened a new office within Birmingham – why was the city such an attractive location to move to?

Our decision to open a third office in Birmingham early in 2019 was based on the huge amount of opportunity this city offers to developers today and will continue to present way into the future. And since our total project value across Birmingham and the wider Midlands has doubled over the last 12 months to £200m, it made sense to have a presence here.

Birmingham has the highest economic growth outside of London, so combined with Birmingham City Council’s Big City Plan, the upcoming Commonwealth Games and HS2 – despite its uncertainty – it makes for a very attractive development location.

In two years, when the Commonwealth Games kicks off, the city will be buzzing, so developers are making plans now to be part of that. We want to be involved in the legacy of the Games, and it was a key driver for us opening a Birmingham location. But that said, our decision to open an office here goes beyond 2022.

Being able to say to developers that Birmingham is open for business gives a degree of security and certainty that the right projects will receive full local authority approval, making them more likely to choose the area to invest in.

To support the construction industry’s new and established players who are targeting Birmingham for their next project, we have brought a wealth of talent from our other UK offices to the city. We have also made a series of high-profile appointments, including Steve Elliott as Associate Director of our Birmingham office. The ex-Head of Building Control at Solihull Council, up until recently managed the frameworks and major projects team at Acivico in Birmingham, before joining Ball & Berry. We want to capitalise on this growing market and ensure we have the right skillsets placed locally, so we can be a true go-to partner to our growing client portfolio within the city.

Why do you think Birmingham is doing so well in attracting investment and development?

The Big City Plan, which is essentially a 20-year masterplan to transform Birmingham into a world-class city centre, has been acclaimed by UK-based and overseas developers alike and is setting the vision for Birmingham’s potential over the next decade.

The public’s attention has come to challenge what Birmingham contributes to the needs of local people and those visiting the city, so the council and other authorities are doing everything they can to demonstrate how seriously they take redevelopment in the region.

For example, there’s been a huge boom over the last decade in residential schemes as people strive for city-centre living. That’s left a lack of space available centrally, so the only option is to build up and reach new heights. The council has accommodated this by relaxing the height restrictions on new schemes and in doing so, many London-centric developers have spread their wings and relocated to Birmingham.

This influx of new dwellings has brought with it a renaissance in large scale city-centre offices, with HSBC recently creating a new HQ in the city and HMRC due to start moving thousands of public servants into its Government Hub this year. With new residents and workers comes the demand for places to socialise, so we’ve seen a rise in the numbers of restaurants, bars, shops and more to accommodate this.

It’s a perfect example of how one small change in policy can do so much for an area.

You’ve been involved in some pretty impressive developments – tell us about some of your favourite developments you’ve worked on?

I have 35 years’ experience across the building control sector, with specialisms in offices, industrial, sports stadia and education, so I’ve been lucky enough to work on some landmark developments.

Some of my favourite developments before working with Ball & Berry are the National College of High Speed Rail, which is now known as the National College for Advanced Transport & Infrastructure; the relocation of BCU into Birmingham City Centre; the iconic Fort Dunlop building, and being part of the Building Schools for the Future programme. Although it was scrapped by George Osbourne, in the four years I worked on it we delivered 22 schools in Birmingham – 12 refurbs or extensions and 10 new builds – which added thousands of additional school places to the city and beyond.

Right now, our Birmingham office is overseeing a set of high-profile projects worth a collective £240m. We’ve just been appointed to Phase Two of the 15-storey hotel and 37-storey residential block at Exchange Square after supporting the completion of Phase One; 395 apartments in the Jewellery Quarter with Sir Robert McAlpine, and the construction of two 14-storey tower buildings in Coventry for Vita Student. It’s certainly not quiet!

You can find out more about Ball & Berry here > https://ballandberry.co.uk/