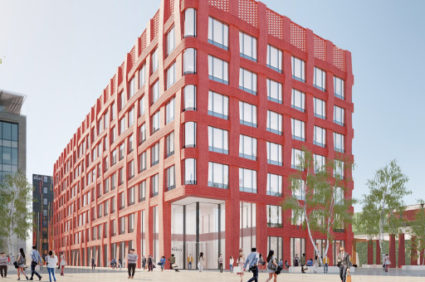 BAM North West team has been appointed by HMRC to fit-out the new UK Government Hub at 3 New Bailey, which will become home for some 2,000 staff during next year.

BAM’s CAT B fit-out of the seven-storey state-of-the-art regional centre totals 20,500m2, and spans across all seven floors including the building’s roof. With a 49-week construction programme the work is due to complete in Spring 2022.

The fit-out aims to be BREEAM Excellent. It is a full BIM level two scheme.

BAM’s work with HMRC follows the successful handing over of the Atlantic Square building in Glasgow, for which BAM was joint-developer and main contractor. BAM Design, which was integral to the Glasgow building, is also engaged on the Manchester UK Government Hub fit-out scheme, as are BAM’s specialist services engineering team which is delivering a range of mechanical and electrical services.

The team is now on site and installing stud partitions and M&E. BAM co-ordinated vehicle access through six gated railway arches owned by Network Rail requiring detailed collaboration with Salford City Council and others, benefitting a nearby extensive residential refurbishment and maintaining a clear route for general traffic and pedestrians.

The council has thanked BAM saying it has ‘exceeded expectations’ and helped them coordinate their own works and assist the fluid and safe operation of the carriageway.

Ian Fleming, Director of BAM in the North West, said:

“We are a very versatile company working across many sectors and with a strong in-house capability in all disciplines of the built environment, and both the Atlantic Square and New Bailey schemes demonstrate how our joined-up business model delivers exactly what clients need.

“We were able to understand HMRC’s drivers from Atlantic Square, and the Atlantic Square team is acting as our peer review here at New Bailey, providing further quality assurance on how we operate.”

“Three New Bailey will be the home for the HMRC Regional Centre as part of the new UK Government Hub in the North West, and we are looking forward to continuing our long-standing presence in Manchester. When completed, the building will offer bright, modern workspaces that meet the flexible and diverse needs of our colleagues and we are looking forward to it opening next year.”

Salford is an important base for BAM, which has self-developed, self-designed and self-built regional headquarters there at Metro. The company is one of the most complete in the built environment sector, designing, building, and managing facilities across schools, leisure centres, offices and hospitals.

BAM is also working on the James Potter Building, a new major trauma and acute receiving centre, for Salford Royal Hospital, and on Manchester’s second area, Co-Op Live, for OVG.

3 New Bailey will be home to one of HMRC’s 13 modern regional centres across the UK.