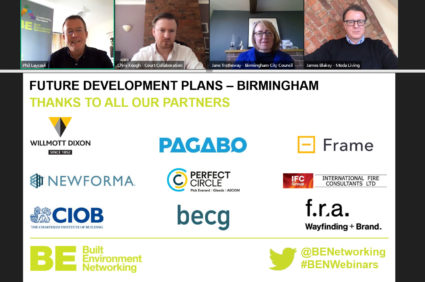 Tomorrow is set to be a big day for the construction and property industry in Birmingham – with a ‘Virtual Planning Committee’ and Court Collaboration’s One Eastside project likely to be approved.

Following suit of numerous other authorities across the UK Birmingham City Council will officially move to a virtual online planning committee to ensure that projects and plans continue to be discussed despite the Covid-19 outbreak.

In addition, Court Collaboration’s One Eastside development, set to become the second tallest tower in Birmingham, is also likely to be approved with the meeting set to answer responses from Historic England made back in December.

Speaking on our Birmingham Webinar Chris Keogh, Director of Development and Operations, said the firm were “looking to be on site straight away in April but this has been delayed due to Covid-19.”

The Birmingham based developer has had several schemes impacted by Covid-19, such as their 224 residential unit scheme Arden Gate and the £75m Axium scheme delivering 304 apartments. The latter looks to have had its completion date pushed back from April by around 6-8 weeks, whilst new sales enquiries seem to be drying up, “however exchanging and completion from those in the pipeline are continuing to complete as expected.”

Some projects are less affected by Covid-19 – such as their 928 residential unit Stone Yard scheme in Digbeth. This £250m development, which includes a communal gym, cinema and dining facilities, is at an earlier stage than the others and despite a few reports which need on site access there isn’t any delays on the project timeframes.

In addition, Keogh said the firm have two other projects on the Horizon. Firstly New Garden Square in Edgbaston Village consisting of 392 one and two bedroom properties which they’re hoping to complete acquisition and demolition by Q4 2020 – followed by a 24-28 month build period.

Second on the agenda is their Brewers Yard project in Wolverhampton which is being brought forward in a JV including the City of Wolverhampton Council and the West Midlands Combined Authority (WMCA).

The brownfield site is situated in the heart of the city close to transport links and the University’s Springfield Campus, and Keogh said plans for the site have been slightly changed in a positive way due to the Covid-19 outbreak.

The current situation has “allowed everyone to reflect” on the extraordinary work key workers, adding: “We’re now looking at how this site can provide for key workers. Developers have probably missed opportunities in the past to look after key workers, but we’re looking to make a difference with this project.”

Fran Raybould, Design Director at wayfinding and place brand experts f.r.a, asked the speakers around the importance of place and community within Birmingham centric developments.

Picking up the question first was James Blakey, Planning Director at MODA Living. He said: “Creating a sense of community is incredibly important to us. From 5-a-side football to movie nights, we enable a great deal of interaction for those living in our BTR units.”

He added: “We don’t want people to feel like they’re renting an apartment. We try to deliver an inclusive community whether – allowing people to furnish their own properties, decorate, have pets. It’s about creating a community and making it feel like their home. So we invest a lot into that community feeling.”

MODA Living, a build to rent (BTR) specialist, have set their sites on Birmingham and their long term plan over the coming years will see them deliver 7,500 apartments.

But one of the stand out elements of their schemes is the sense of community they bring – and in addition to the units they’re creating 450,000 sq ft of amenity space, 300,000 sq ft of commercial and 90,000 sq ft of co-working space, all integrated into their BTR offering.

They’ve recently submitted a planning application for their scheme at Great Charles Street, a 722 home project ranging in height from 4 to 16 storeys.

The Mercian is also currently under construction in the city – where 281 homes are being built towering 42-storeys, with a completion date of mid-2022.

The scheme oozes their values and vision of creating a truly exceptional living environment – creating “an exceptional place to work, live and play”. Integrated with the new local tram system on Broad Street the scheme “includes a 200m running track” and is an exemplar in BTR development.

The firm are “striving for an inclusive community” when they design their schemes – and they utilise both inside and outside space to do just this. Active frontage with the aim of supporting local independent businesses, internal and external realm and green space, co-working facilities, excellent digital connectivity and more all merges into this community aim.

And the MyModa community app allows the firm to connect their communities – with a neighbourhood forum, travel information, offers from partners and information on amenities. This also linked into “a big focus area for the company, health and wellbeing.”

Blakey said Covid-19 might have a major impact on space standard. He said: “It was create a greater focus on space standard. The Government should look into them as they’re currently a little historic. Now is the time to look at the minimum size standard of apartments, and how co-working builds into it.”

On the Birmingham marketplace he added: “Even despite this dreadful situation we all find ourselves in due to Covid-19, there is a huge opportunity in Birmingham and there is great potential to build on the fundamentals of the city.”

And he was full of praise for Birmingham’s planning department stating: “The Birmingham City Council planning team are doing a great job. They have a real can do attitude where they say “let’s just get on with it” and that’s why the city continues to build and expand. And since the Covid-19 outbreak the availability of the team has been great.”

Jane Tretheway, Assistant Director of Housing Development at Birmingham City Council, welcomed the projects by the developers as the Council “has a need for 89,000 new homes, with 13,000 on the waiting list.”

She said: “We have plans for 51,100 new homes, 400ha of employment land highlighted, and £4bn of infrastructure investment.”

Covid-19 has however impacted the Council’s delivery of new homes “with seven housing sites now suspended, but we’re reviewing the closures and looking to come back on site next week. It’s easier to achieve social distancing measures on more traditional builds rather than the building of towers.”

She added that “a main focus for the City Council is the response to air quality and climate change,” and the Council has a difficult task of “rebuilding the city” due to the amount of existing stock which “is nowhere near zero carbon.”

With the arrival of HS2, the hosting of the Commonwealth Games, and the continued confidence in the marketplace it’s clear that Birmingham is continuing to be a hub for investment.