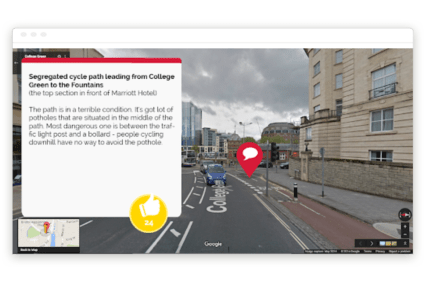 The below is a guest article written by Commonplace – a sponsor of the upcoming West of England Development Conference.

The City of Bristol wanted to invest in ‘Bugbears’ – minor issues that are a nuisance and a deterrent to cycling and walking. The best way to identify these was to engage the public and crowd-source ideas.

Active travel means traveling using a physically active means like walking or cycling. These are typically short, local journeys like cycling to work or walking to the shops. Much of the rhetoric around active travel is extremely positive, it is the policy that delivers reduced congestion and healthier communities, but often, the infrastructure for people to do so, is not quite there.

More people in Bristol travel to work by bike or on foot than any other urban area in the UK, outside of London. The Mayor had set an ambitious target to get 20% of people cycling by 2020. To achieve this, the council were keen for locals to have their say on cycling improvements and proposals.

Using a city-wide Community Heatmap, they used Commonplace to visualise the conversation, understand support for particular interventions and collect accurate data to help with transport planning.

‘The commonplace has been hugely successful – 5,000 responses in a month. If these were emails or tweets, the work of sorting them would have been immense’ – Phil Wright, Design, Engagement Manager, Bristol City

Why did they need to implement active travel schemes?

In order to improve on the travel infrastructure in the city, Bristol and Travelwest needed a way to collect large amounts of information from the public in a way that would be both engaging and sufficiently detailed for prioritising.

It was important to reach a wide audience to ensure the joined up approach of cycling and walking schemes across the whole city. This is where the Commonplace platform came in. We were able to provide a digital strategy to reach groups beyond those traditionally motivated to comment on transport planning issues.

The site created for this project allowed comments to be sorted easily by priority, type of issue, location and the “Cycling Persona” of people commenting. Questions such as ‘are individuals using road bikes daily, or town bikes more occasionally?’ became easy to answer, through credible and efficient prioritisation.

6000 people visited the Bristol Commonplace site, and made 9,148 contributions in total.

For this project, Commonplace devised a special version of our Community Heatmap tool to help with Bristol council’s transport planning. The respondent journey was as follows:

‘The Commonplace system is providing excellent value, and the team have been friendly, creative and efficient. We look forward to the next stages of our work with them’ – Phil Wright, Design, Engagement Manager, Bristol City

The agreement feature on the site is designed so people can agree with other people’s comments. This helps identify if there is a significant group that cares about the same issue. If a comment received 24 agreements for example, this means 25 people care about this issue, providing evidence to be used in further planning or investment proposals.

Most agreed comments in the consultation

The Commonplace dashboard collected this data for Bristol council, and with comments being associated with a specific location or area, the issues could be explored and captured appropriately. The images below are assets that we composed for communication purposes:

At the bottom of this hill is a key cycle lane, however it had several issues making active travel in the area harder. However, measures such as fixing potholes and removing the bollard would make it instantly safer and easier to travel by cycle.

Wish for a protected cycle lane up Cheltenham and Gloucester Road

This proposal was outside the scope of Bristol Bugbears, however notes as important for future cycle schemes.Badly designed junction of cycling path
This area was noted as problematic, with not even enough space for a bike to wait. However, this could be resolved by changing the road and cycle markings which make it clearer and safer where the path continues.

Bristol Council were able to use all of this feedback to help highlight the issues affecting walking and cycling across the city so that they could prioritise investment and resolve as many of these issues as possible over time.

To learn more about the project, please visit the Bristol Bug-bears Commonplace site and explore the conversation: – https://bristolbugbears.commonplace.is/