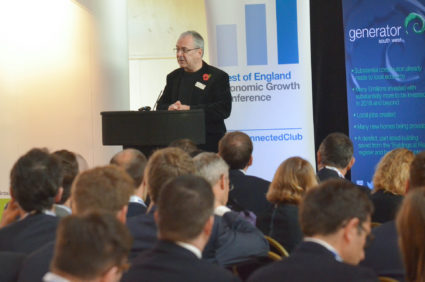 Bristol will have more frequent rail connections with Central London than the outer stretches of the capital’s Metropolitan underground line by the end of next year, the chair of Network Rail has told the West of England Economic Growth conference.

Sir Peter Hendy said in his presentation during the opening session of the Built Environment Networking conference, that next Easter’s resignalling of the city’s Temple Meads station would boost capacity along the line. The resulting increase in track capacity, combined with links to Crossrail at Reading and Paddington, plans to transform the way people think about travelling on the Great Western Rail line. “In 2018, Bristol will have more trains to central London than the outer Metropolitan Line: from December 2018, you will be able to get from Canary Wharf to Temple Meads with one change in 90 to 95 minutes.”

He also said that the new intercity trains being introduced on the GWR line were able to carry 25% more passengers than the vehicles they had replaced. He said Network Rail was working with the West of England Combined Authority (WECA) on plans for ‘Metro West’, a new commuter rail network which will straddle the city region from Severn Beach and Weston-Super-Mare in the west to Bath in the east.

The authority’s joint spatial plan and transport strategy provided good foundation to build on for the west of England, which had more cash to spend per capita on transport than any area outside of London, Hendy noted. “It’s important to get behind the long-term transport strategy that the region needs and deserves: part of that that money needs to be used to deliver MetroWest more quickly.”

WECA’s recently elected mayor Tim Bowles said in his opening keynote presentation that the city-region’s population had grown by 9% between 2001 and 2011, which was faster than any other in the UK.

And he highlighted IT giant Oracle’s decision to choose Bristol as one of its cloud computing global accelerators as a ‘powerful statement of intent from a leading global technology company’.

Bowles said the combined authority had commissioned a study to give an overview of the west of England’s digital connectivity, which would help inform future housebuilding plans for the city-region.

Sado Jirde, director of the Black South West Network, rounded off the opening keynote presentations by reminding the audience that not everyone in Bristol was enjoying the benefits of the city’s growth. ”Too many people are being left behind: it’s the biggest challenge facing our society.’