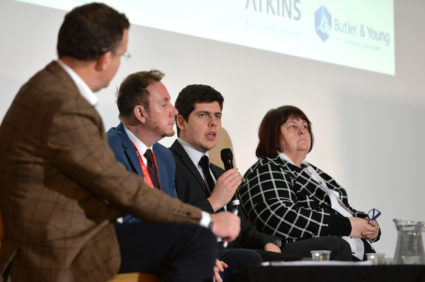 A Plan B is needed ‘swiftly’ for South Wales’ traffic problems if the proposed M4 relief road is not given the green light, the Leader of Cardiff Council has warned. Speaking at our South Wales event Huw Thomas told delegates that his authority is ‘totally supportive’ of the plans.

He said: “It’s a politically difficult issue and there are strong environmental arguments against, but nobody says the status quo is an option. If it doesn’t go ahead, we will be looking very swiftly for a new project that addresses traffic issues on the motorway and significant public transport investment around Newport and Cardiff.”

But Rob Stewart, Leader of the nearby City & County of Swansea, said that his authority did not support the project because of the risk that the capital investment to fund it would lead to cuts in capital investment elsewhere in the region: “You can’t spend all of your money in one area. Given we don’t know where the money is coming from and that there is no consensus, we are not supporting it.”

Thomas said that Cardiff’s local development plan is due to be agreed next month as he outlined the council’s plans to boost its relatively low levels of grade A office space, by expanding the city centre south of the railway line.

Thomas said the authority, alongside the Welsh government, is pressing Whitehall to carry out the ‘long overdue’ upgrade of central Cardiff rail station. The project will unlock 35,000 jobs in the surrounding area, including at South Quay where there is planning permission for 250,000 sq ft of office space.

And the council leader said that the expansion of the city centre would benefit the whole of the Cardiff Capital Region with half of the jobs generated there expected to be taken by people from outside the Welsh capital. The development of the capital region will be underpinned by the Metro rail programme, which aims to make it easier for people to commute rapidly from northern parts of the valleys to Cardiff city centre and vice-versa.

A ‘iconic new’ indoor arena will also kickstart the regeneration of Cardiff Bay, which he said remains a ‘work in progress’. Whilst a new convention centre is coming on stream in Newport, he said the Cardiff Bay arena would plug a gap in the south Wales for 15,000 capacity venue.

Elsewhere in the city, Thomas said the council aims concentrate research and development activity in the city’s northern quarter and is looking at the potential of the GE site, plans for which were showcased later in the conference.

But he said that authorities in Wales and the West of England must deliver a more coherent vision in order to provide a counterweight to the Northern Powerhouse and the Midlands Engine.

And he said Cardiff itself is due to build 1,000 new council houses by 2022 with the same number pencilled in the following eight years in order to meet demand from the city’s 4,000 long housing waiting list.

Debbie Wilcox, leader of Newport Council, said that Wales’ third biggest city has a ‘range of ‘exciting projects’ coming forward, while developing itself as host city for global events like next summer’s Transplant Games.

Stewart said that his Swansea £1.3bn city deal should recover 70% of the £5bn GVA gap between the city-region and the rest of the UK