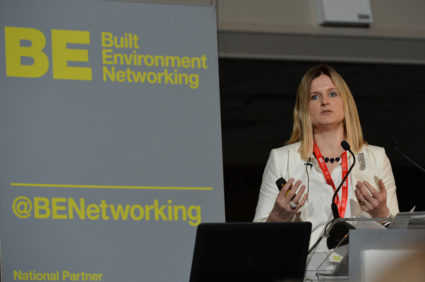 A unique opportunity to develop a new vibrant, car free community on a 27HA reclaimed peninsula has emerged in Portsmouth.  There are proposals for  new 4000 homes, along with 1 million sq ft of employment space

Natascha McIntyre Hall, Assistant Director of Portsmouth City Council told attendees of the South Coast Development Conference that: “What we’re doing with Tipner West is trying to get people to stay.”

Well-being and incorporation of the natural world are key the plans, which intend to create a new, Hall said: “We are really trying to make sure that 70% of the homes have a view of blue of view, and we are expecting all of the others to have a view of green.”

Accessibility is baked into the scheme, with the intention to avoid curbs and barriers. Hall said:  “The whole waterfront outside of marine employment is accessible to everyone, from anywhere on the scheme there will only be a 10 minute walk to a faster method of transport.”

The scheme is soon to go to public consultation, and is estimated to be worth around £1.3bn.

Ensuring that residents feel a sense of security in their community is also key to the planning of the scheme, Hall invoked the history of the city, which was once the most fortified in the world: “We are looking at the history of Portsmouth and many different ideas about castle safety and security and how we can bring those values to the scheme.”

If approved, work on the scheme is projected to start by 2022.

The Bargate Quarter is an area regeneration centered around Southampton’s medieval gatehouse,  being developed by Tellon Capital, James Burchell, a partner at the firm “We’ve invested in approximately £250m worth of assets with the view to creating something that will have a sense of place.”

The development is comprised of 285 apartments, a 240-room hotel that has already been pre-let and 70,0000 sq ft of retail space- comprised of 23 high street units and five kiosks.

The retail offering will be aimed primarily at the high end luxury market, basing it off the success of other comparable offerings, the 700,000 retail catchment  and the extensive cruise liner traffic that moves through the city, Burchell explained “Southampton is the capital of the country ever growing cruise liner, there are 450 cruise liners that arrive every single year, there are 20 new launches this year, 1m passengers, it’s a huge amount of tourism.”

Burchell described the present retail offering in Southampton as being “disjointed”  and that the “Strategy is to reunite the city centre, create and enhance public realm”.

He continued, stressing the importance of making a real difference to the South Coast: “ We are creating a new fourth artery connecting into the Bargate itself, realising and bringing back to life the historic city walls that go back almost 1000 years and which had been left behind and forgotten about.”

Southampton is set for further development, Mike Harris, Deputy Chief Executive at the City Council explained the scale of their ambition: “In 2012 we set out a city centre masterplan which said over the next 20 years, we want to develop our city centre on key sites, and attract over £2bn of investment, 8 years on we’ve secured that £2bn.”

The Mayflower Quarter is the next big step for the city, one of the largest city centre regeneration projects in the country, Harris explained “There’s 55HA of available land, from the central station down to the waterfront, significant amount of it in our freehold ownership.

Despite the a masterplan for the scheme not being expected until December 2020, the City Council have decided to move forward with a £75m initial stage.

The site of  former Toys “R” Us store is the first phase of the scheme, Harris revealed: “We will be bringing forward phase one with FI Capital and the city council is investing £27m to bring forward work space, which will total 70,000 sq ft over the next few years.”

THAT Group has created a number of  inspiring schemes across the South Coast, including two Hilton Hotels in Bournemouth.

They have also regenerated two historic buildings through creative reuse, including the 1930s Bournemouth Echo building, and the 1950s Knight and Lee Southsea store, which is being turned into a cinema, hotel and rooftop bar.

The South Coast is becoming a stronger destination through ambitious schemes, all of which have put the focus on place front and centre.