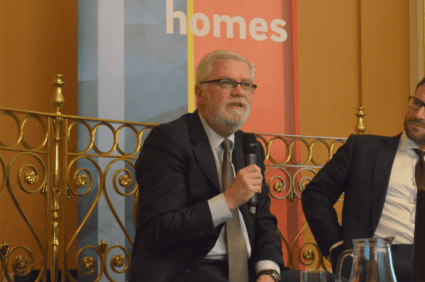 One of Britain’s highest profile property companies has transformed itself into a vehicle for delivering its deceased founder’s philanthropic goals, our Liverpool Development Plans Conference has heard. John Nugent, interim managing director of Derwent Holdings, told delegates that the company’s current name would disappear as it rebranded itself as the Albert Gubay Foundation later this year.

Nugent said most of Derwent’s profits are already being used for good causes, and negotiations with the Charities Commission are underway to establish a new charity into which half of Derwent’s total portfolio will be transferred. The name change reflects the charitable objectives of its founder Gubay, who died in 2016, having pledged to give most of his fortune to charity. He said: “He wanted to give money back to communities that had helped to create this. Now we are making money for charity.”

Since Gubay’s passing in 2016 Derwent have given away £8m, which it aims to increase to £20m per annum. Nugent said the company’s tenant, some of whom will be indirectly donating up to half a million pounds per annum via their rents, will receive a report at the end of every year itemizing the amount they have contributed to good causes.

An example of these is a new community and wellness facility close to its new Liverpool Shopping Park retail development on the city’s Edge Lane, which Derwent is discussing with Liverpool council. He said that Derwent will fund the development and running costs of the facility for three years in the hope that it will become financially self-sufficient afterwards.

Nugent said that the company’s board was due soon to agree investment plans for subsequent phases of the shopping park. Initial trading had been ‘positive’ at the park over the first Christmas period since it opened last year.

Catherine Holmes, senior project manager at Homes England said that the north-west contains the recently relaunched housing agency’s biggest residential land portfolio. Over the next 18 months Homes England is set to dispose of a total of 305 ha of residential land on 30 sites which have the capacity to deliver 5,500 homes.

The agency’s ten sites in Merseyside include a site in Sandymoor near Runcorn, which is due to come to market around this spring with outline planning permission for up to 191 homes.

She said Homes England also had plans in the pipeline for a garden village in Knowsley containing 1600 houses, 22.5 ha of employment and a new country park.

In his presentation, Peter Gladwell¸ head of public sector partnerships at Legal & General Investment Management, said that the insurer had secured a major pre-let with HMRC for its India Buildings in Liverpool, which would see the tax collection agency become one of the city’s largest employers. It has taken a 25-year lease for around 270,000 sq ft of office space across ten floors at the landmark building, which staff will be moving into from next year. But he said that L&G wanted to have greater exposure in Liverpool.  “We aren’t where we would like to be in Liverpool.”