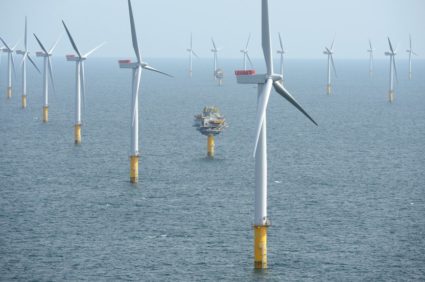 Doggerbank, part of a submerged peninsula that once connected the British Isles to mainland Europe, has been designated as the site of the world’s biggest ever wind project.

Generating enough power for 4.5 million homes, it will power 5% of the UK’s entire energy demand by 2025.

“We were quite lucky to be the biggest winner in the UK Government’s low-carbon auction” said Alexandra Malone, Head of Corporate Affairs at SSE Renewables – speaking at our Building the UK’s Energy Future Conference. The firm is developing the project in a JV with Equino.

Alongside this project, they will also be developing the largest off-shore wind project in Scotland, Malone said: “Our Sea Green wind farm which will take over from Beatrice as Scotland’s biggest wind farm will be able to power 1 million homes and bring great economic value to Scotland. It will add £1bn to the Scottish economy and support 500 construction jobs.”

Malone described the company’s strong green commitments: “We don’t have a strategy for sustainability, we have a sustainable business strategy. By 2030 we pledge to cut our carbon intensity by 50%, treble our renewables, enable electric vehicles and be a leader in fair wages and fair tax.”

SSE Renewables are also driving forward more on-shore wind projects, despite there being a slowdown in that sector, Malone explained: “There was only one on-shore farm built in 2019, but we will be taking forward an extension project at our Gordonbush farm.”

She expressed positivity that the Government had not pursued bans on on-shore wind despite their political contention.

Off-shore wind has been undergoing a game-changing price reduction in the UK, becoming one of if not the least expensive source of electricity, and Malone touted the “record low prices of £40 per mwhr, which is a 60% reduction in price.”

Will Apps, Head of Energy Development at The Crown Estate, attributed part of the cost decrease to an improvement in funding mechanisms: “Contracts for Different (CFDs), which work on a 15-year basis for these projects, has provided a competitive base to drive down the costs that we see.”

The Crown Estate is the public sector organisation responsible for licensing the rights for offshore generation, and Apps stressed the difficulty of finding locations for off-shore wind: “There is a very, very busy sea space, and finding the space for farms is not an easy task.”

Citing potential disruptions to shipping, fishing and impacts on navigation, Apps also noted the need to minimise natural disruption from the projects: “We have a biodiversity crisis on the scale of the climate emergency.”

David Parkin, Director of Progressive Energy, praised the success of carbon reduction as being the “first decoupling of emissions production and economic growth in human history” yet was still not on track to meet its 2050 carbon neutral targets.

Parkin said: “The Committee on Climate Change will say 80% of the hydrogen we need will be from blue hydrogen and 20% from green hydrogen which is from electrolysis of renewables. Others say 60-40, others say 50-50.”

They are combining hydrogen production and carbon capture and storage to remove 97% of carbon emissions produced through the use of gas to heat homes.

The North West Energy Cluster aims to be the UK’s first low carbon industrial cluster by the 2030s, to bid on a £132m government funding pot.

Emma Degg, Chief Executive of the North West Business Leadership Team, suggested that these industrial clusters represented the future: “There are two ways of decarbonising. We can either shut down industries or make sure our industries are fit the future.”

Wind and hydrogen provide exciting paths to decarbonisation, and whilst both have challenges to overcome, they will both play major roles in the UK’s energy future.