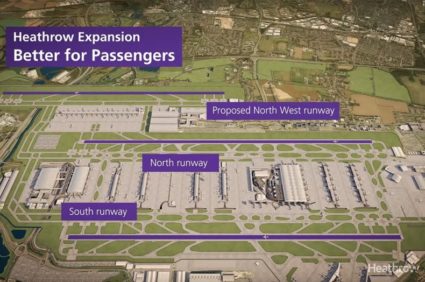 Heathrow’s expansion will bring massive benefits to the UK economy, the London Property Club event heard, Rupert Waters, Head of Economic Development at Heathrow, detailed the extensive benefits the £14Bn project will bring. Waters highlighted how the airport has faced difficulties at times in garnering support for the expansion from local councils in Buckinghamshire, despite the economic development the project will bring.

Councils have expressed concerns about the potential disruption for residents as a result of the expansion. The new runway is planned to open by 2026 and is in response to the pressing need to expand airport capacity in the South East. Waters stated that the airport was already operating at 98% capacity, with an aeroplane passing through Heathrow every 45 seconds.  He also stated that Gatwick airport is the busiest single runway airport in the world, showing the importance in expanding the UKs struggling capacity

Waters noted the difficulties in convincing councils through job creation promises. “I think there’s some tension there that local authorities are desperately interested in residents based measures of how they are their voters with employment rates are so high that the ability to move from 80% to 81% employment rates in Spelthorne or South Buckinghamshire is not perhaps the driver that might be in more it more straightened times.

“And the challenge then is to try and get some of these jobs out into those local economies, which then drives business rates and wealth creation in those local economies”. Heathrow has a commitment to source 95% of its contracts for the £14bn expansion from the UK, and 60% from beyond London and the South East. He added that when local councils are supportive of the expansion plans it is due to local economies which have a “high number of small businesses” due to the need to keep these smaller firms afloat.

Despite this, the potential economic benefits for the area are significant. The expansion is projected to lead to 40,000 additional jobs, as well 10,000 apprenticeships, bringing new opportunities for young people.  Heathrow currently supports one in five jobs in the area, providing 114,000 jobs, which the expansion will increase to 155,000 jobs. Improving jobs matching is another key goal of the task force, improving the economic efficiency. Waters also announced that Heathrow would be investing in local technology firms, further the local economic contribution of the expansion.

The project also comes with an accompanying Southern rail scheme, attempting to reduce the numbers of people traveling to Heathrow via car.  This will also limit the ecological and traffic impacts of the higher numbers of travellers flying to and from the expanded airports. Although plans to build a new nine story car park have been approved, Waters stated that the structure is not permanent, and Heathrow is aiming for the rail scheme to prevent any expansion in car travellers.

Rail expansion is projected to link the 100 largest towns and cities throughout the UK to connect to Heathrow. This will allow 70% of the UK to be within 3 hours of the airport, making the local area highly connected for business.  Heathrow is at the core of the UK’s air freight industry, currently bringing in 60% of the total. Expansions to the airport would allow an expansion of the volume, encouraging industry and development in the local area.  The expanded rail network would also allow the transportation of this freight without causing a surge in HGVs.

Heathrow have appointed former government minister Lord David Blunkett to lead their ‘Skills Taskforce’, which will ensure there are the skilled workers needed to construct and operate the expanded airport. This will provide new skill opportunities across the country but will particularly provide new opportunities for local workers to improve their skills, particularly young people.

Balancing residential and commercial interests are always going to be a key consideration for local authorities. If the proposals for the Heathrow development are carried through, they have the potential to satisfy both.  There will always be some negative externalities that emerge through development. The proposals to limit disruptions are key to achieving the necessary support from councils and showing the potential for overall success.