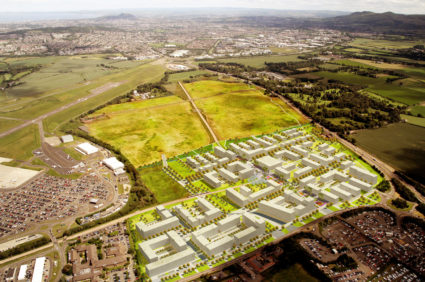 Due to the concerns over the impact over the development would have on transport, the Scottish Government has called-in plans for a major mixed-use business-les development near Edinburgh Airport

The 90-acre International Business Gateway scheme has been in the pipeline for more than a decade, which is now set for vacant land near the airport’s Hilton Hotel and the main A8 road.

The £500 million project is being driven by a consortium consisting of New Ingliston Limited, Murray Estates, Frogmore Property and Salmon Harvester Properties.

This project is designed by 7N Architects and it will eventually boast around 122,000 square metres of commercial and business floor space, nearly 400 new homes – 25% of which would be affordable – 1,150 hotel bedrooms and at least 5,000 square feet of shops, restaurants and leisure facilities.

The future of the business hub will now be decided by the Scottish Government, despite gaining planning approval from the City of Edinburgh Council in May

The Scottish Government said in their letter setting out why the application had been called in “The reason for this direction is to allow further consideration of transport impacts of the proposed development, in view of the national importance of the West Edinburgh area.”

David Murray, the managing director at Murray Capital, labelled the decision “deeply disappointing” and also said it was putting politics ahead of growth and investment.

Mr Murray said: “The government has made clear its intent to steward the growth of the Scottish economy at a time of very significant downside risk. But the words are not being matched by action in this case, quite the reverse.

“This project would create hundreds of jobs in its development and house 12,000 jobs when completed.

“The politics of the planning process is putting investment, jobs and growth at risk. The danger is the message from the Scottish Government to the world is a negative one at the very point when we need strategic projects like this active and investing in the city and country.”

Another decision on a west Edinburgh project by the same developer, the Edinburgh Garden District, is still pending more than three years after it was called-in by government planners.

Mr Murray added: “That project has already been with the Scottish Government for over three years following planning approval by the city council in June 2016. Both are strategically critical projects for the city and the country. I ask ministers to expedite this next process with very significant urgency and hope that they understand that the costs of delay are very real.”

“That project has already been with the Scottish government for over three years following planning approval by the city council in June 2016 – Both are strategically critically projects for the city and the country. I ask the ministers to expedite this next process with very significant urgency and hope that they understand that the costs of delay are very real!”

On the Garden District application, the Scottish Government spokesman said: “This is a complex application and ministers are currently giving full and proper consideration to it Every effort is being made to issue the decision as soon as possible.”

Come and join us at our Scotland Development Conference which is supported by the Scottish Government, Structured House Group & BOHO >