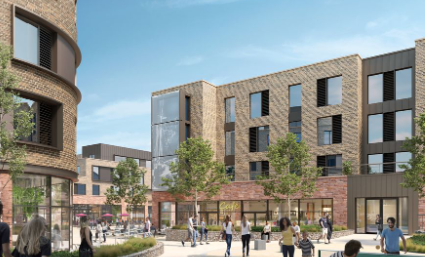 The Exeter Plan – the first new local plan for the city in 10 years promises to shape the city’s future development.

An initial eight-week consultation on the first draft is now open until Monday, December 5. More will follow before the plan is refined and eventually adopted. Exeter City Council have identified sites across the city, with the aim of building 14,300 homes in the next twenty years.

The plan addresses issues like climate change, homes and jobs, the future of high streets, transport and infrastructure and design quality. Around 30 policies are included, reflecting points raised from the first ‘issues’ consultation on the emerging plan in 2021.

The draft includes the city’s spatial strategy and highlights the benefits of steering the majority of development – around 85 per cent – towards brownfield sites to protect the city’s landscape setting and environmental quality.

It also proposes to consider “modest, greenfield development as a supplement to brownfield schemes” and to protect the “sensitive Exe Estuary and the sensitive hills to the north and north west of the city,” whilst avoiding areas of higher flood risk where possible.

Based on the government’s calculation that Exeter needs to provide 650 homes a year, a number of locations are identified. These include eight large strategic places, smaller council-owned sites, those promoted by third parties and a small number of allocated sites not yet built on.

The plan says: “Liveable Exeter, our bold city-making initiative, anchors the plan. Liveable is about building at least 12,000 new homes on brownfield land in the city as the alternative to developing in the countryside. This will protect our precious green spaces and surrounding hills.”

It had already been announced that eight sites across Exeter are mentioned as part of the Liveable Exeter vision. These includes vast redevelopment around Marsh Barton, Water Lane, as well as the Haven Banks Retail Park. But housing at St Bridget Nurseries, next to the Met Office HQ, next to the A379 near Ikea, as well as on a car park in the city.

The plans also include the possibility of demolishing the Fever and Boutique nightclub and it being replaced with ten homes. According to the plan, 85 per cent of sites earmarked for development will be on brownfield sites, that is to say land that has been previously developed on.

Introducing the plan to the council’s executive earlier this month, director of city development Ian Collinson said: “I’ve not seen another statutory local plan anywhere in the country that’s brought together the vision for the place in the way that we’ve done here.”

While he said it was a “coherent plan,” Mr Collinson added: “This is not a done deal and there will be lots of opportunities for people to shape it.”

Cllr Phil Bialyk, leader of the council, introduces the document. He says: “Exeter is a fantastic city and I know that all of our residents feel the same way, so it is very important that everyone has a say on how it develops in the future.

“That’s why we want everyone to make sure their voices are heard. We’re reaching out to all of our communities and businesses with the draft plan. It will touch the lives of everyone living in the city as well as those working, studying in or visiting Exeter, so everyone needs to own it and have a say.”

The council has a legal duty to prepare planning policy for the city. The Exeter Plan will replace earlier development plans. As well as being available on an interactive online platform called Commonplace, hard copies of the consultation can also be found in some public places, as well as at a series of public exhibitions.