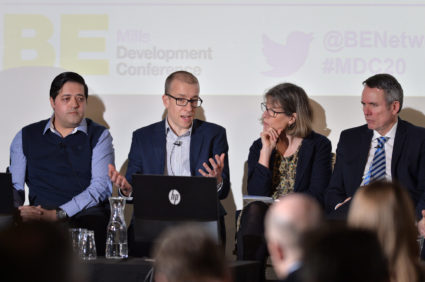 Former mills can become easily susceptible to damage by fire after being left vacant, both from arson and accidental fires. One such of these Mills was Newsome Mill in Huddersfield, left vacant since 2003.

Whilst Newsome Mill originally had a development plan in place according to Nigel Hunston, Group Leader at Kirklees Council, it was never completed. Hunston explained: “We had planning consent in place since 2009 to convert the main mill into 22 apartments and 42 new builds at the back.”

However, following costings, only £10,000 of profit was available to the developer and the project never went ahead. In 2016 the site suffered a catastrophic fire that reduced the building to a single story.

The council have now waived the costs that made the site unviable in the first place, and have “granted planning permission with no contributions, and will get a section 106 for the repair of the clocktower” according to Hunston.

Westwood Mills in Linthwaite is another mill that Kirklees is hoping to develop, a Grade II* listed property. It needs funding to get off the ground, with the council estimating a “conservation deficit of £57,000”, according to Hunston.

A similar case occurred with Drummond Mills, a part of Huddersfield textile-manufacturer-turned-developer SKA Development’s portfolio. Being purchased as an investment building, it was the victim of a tragic fire in 2016.

Saj Pervaiz, Financial Director for the firm, said that they were currently “in live discussions” over the future of the building, giving the possibility of redevelopment for the site.

The scheme delivered “some of the highest rates every achieved in Bradford town centre” according to Andrew Craig, Managing Partner for the firm.

A lot of this was enabled by the flexibility they were given by local authorities keen to save the building, Craig explained: “If you had to have section 106 or a large proportion affordable it might not have been deliverable.”

Rutland Mills in Wakefield is bound for a major creative revitalisation project, Tom Stannard, Director of Regeneration & Growth at the Council explained: “Rutland mills will be rebranded Tileyard of the North with a very similar focus on creative, digital, music industries in particular.”

The restoration of Rutland Mills comes as a part of a larger project which has seen The Hepworth developed. It is also part of a wider placemaking destiny for West Yorkshire,  Stannard said: “There’s a production park already in Wakefield and Channel 4 is coming to Leeds.”

The West Yorkshire Combined Authority is supporting the Rutland Mills development along with mills in Bradford. Judith Furlonger, Head of Housing emphasised the importance of mills to the region and said to prospective mill developers: “We encourage you to come and talk to us.”

On the financial support the authority could offer, Furlonger explained: “There is no free money now, pure gap funding isn’t available, what we can provide is a long-term investment, that investment can be quite flexible in how its repaid.”

The National Trust have also been supporting mills that have been faced with conservation threats, being one of the first institutions to recognise the historical significance of industrial history.

Recently the trust has secured two mills, Queen Street Mill and Helmshore Mill, from falling into disuse. Eleanor Underhill, Assistant Director of Operations at the National Trust said: “We became aware of the plight of two mills in Lancashire which were run by the local authority. The local authority didn’t have the funding available.”

Mills provide a multitude of opportunities in different states of repair, it is all about finding the right solution, for the right mill that incorporates an understanding of the place and ecosystem that development will feed into.