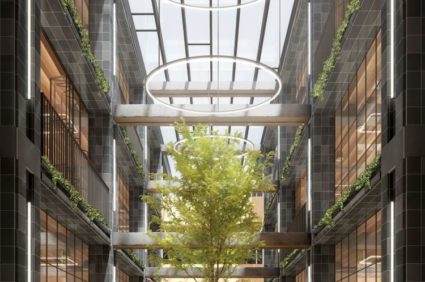 Glenbrook have announced a new exciting scheme in Stockport.

The developer and investor plans to transform the former Marks & Spencer in the Merseyway Shopping Centre into an office-driven mixed-use scheme called STOK.

Under the proposals, the building would contain two storeys of office space totalling up to 64,000 sq ft, of which 32,000 sq ft will be made up of two open floorplates of 16,000 sq ft each.

Retail units would front onto the Merseyway precinct, with their exact uses yet to be determined.

Glenbrook “believes STOK will be a real game-changer for Stockport”, according to Chris Lloyd, the company’s investment director. “The town centre itself has hardly any new office space, yet it is in perfect location for an office scheme.”

Glenbrook are speaking at our upcoming Leeds Development Plans Event in October, where they will reveal some of their developments in the Leeds City Region.

He added: “The final configuration of the space is flexible and will be led by the requirements of the occupiers, but we envisage it will be primarily office-led, with a smaller amount of retail and leisure space to complement the mix on Merseyway.”

Glenbrook acquired the building in October last year from Stockport Council for an undisclosed sum after M&S closed its doors in April 2018.

Construction company Austin Wilkinson Demolition started work on the site in December last year to strip out the building and remove asbestos. This work is expected to complete in May.

Meanwhile, AEW Architects and interior design agency Incognito are working to remodel the building. The refreshed designs include a central atrium with two open-plan office floors, three lifts, cycle storage and a second-floor outdoor terrace. The fit-out is expected to begin in July.

CBRE and Edwards & Co are joint agents for the office scheme, while Metis is the leisure and retail agent.

Cllr David Meller, cabinet member for economy and regeneration at Stockport Council, said: “Following [the council’s] interventionist approach by investing in Stockport Exchange, Redrock and Merseyway, it is excellent to see private developers such as Glenbrook showing confidence in Stockport and investing in our town.”

The council this week detailed another next stage of its town centre regeneration strategy, a proposed bridge linking the £120m Stockport Interchange mixed-use scheme with the the train station, together with a rooftop park. The council has launched a three-week consultation on the bridge and park, concluding on 29 March.

The bridge is part of Greater Manchester Mayor Andy Burnham’s walking and cycling Mayoral Challenge fund. Wilmott Dixon was appointed to develop first-stage proposals for the interchange alongside a joint venture between Cityheart and Rise Homes to bring forward 196 homes. The two-acre ‘Podium Park’ would be located on the roof of the interchange.

WSP is the engineering consultancy for the neighbouring Stockport Town Centre and Town Centre West Infrastructure Programme and is tasked with studying what supporting infrastructure is needed to link up the various components of the town’s regeneration.