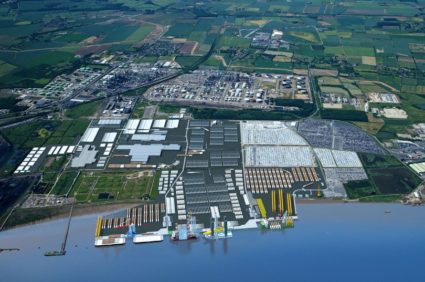 A decade-long battle came to an end for the Able Group this week when the Chancellor confirmed its plan to build a £500m wind turbine manufacturing plant was being backed with £75m of government money.

The Able Marine Energy Park at Killingholme in North Lincolnshire, which was first envisaged in 2009, involves the construction of a 1,349m heavy-duty, deep-water quay and other port-related assembly facilities and will see the creation of 1,500 jobs by 2030.

The government support comes via the Offshore Wind Manufacturing Investment Scheme and that comes on top of nearly £300m already invested by Able, whose development director Neil Etherington explained why the venture deserved taxpayers’ money.

He said: “It’s a sizeable amount of money we’ve been provided with by government [and] we’ve always made it clear we needed that leg up because it is a risky project.

“We are also doing the right thing in terms of the planet and climate change.”

The new turbines made by Able will be stationed in the Humber and will play a huge role in helping Boris Johnson deliver on his pledge to power ever home in the UK with offshore wind energy by 2030.

Stephen Parnaby, Chair of the Humber LEP, said: “In the case of Able we have been working closely with them for almost ten years, though highs and lows – so in our final month I am especially pleased that these important foundations.”