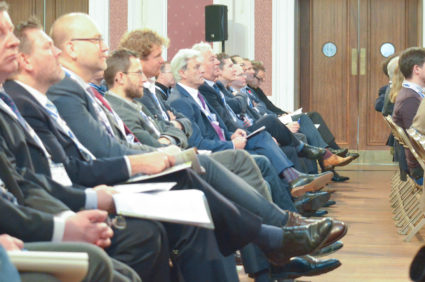 The government’s industrial strategy is not ambitious enough, the chief executive of Peterborough’s business support agency has warned during a Built Environment Networking conference. Quizzed on the recently published industrial strategy during the devolution debate at the Cambridgeshire & Peterborough Economic Growth Conference, Opportunity Peterborough’s Steve Bowyer said: “It’s OK but it doesn’t go quite far enough. If they had the whole of the government behind it, it could have been braver.”

He pointed to how other countries had provided stronger incentives to encourage business, like tax breaks.

Fellow panellist and economist John Kovacs said that the city-region’s development plan target to double the size of the local economy over the next 20 years was not as ambitious as it should be. He said that the doubling of growth equated to a compound annual growth rate is 2.5%, which while higher than that anticipated for the UK it was lower than the figures of 6.5% being achieved in parts of the area. “What sounds like quite an ambitious target is quite conservative. It’s good compared to UK growth but we should be doing better.”

Kovacs also said that the £600m over 20 years offered to the combined authority under the devolution deal only amounted to £20m per annum at today’s prices. To put this sum into context, he pointed out that it was not much more than the £16m recently invested in creating a new railway station at North Ely. “One year of funding on just one project is clearly not enough,” he said, adding that the £70m earmarked in the Budget for affordable housing in Cambridge was also likely to be insufficient. “If you think about costs of development, I’m not sure that £70m is going to go very far.”

However Antoinette Jackson, chief executive officer of Cambridge city council, said that the creation of the combined authority gave the area a ‘direct link into government’, which provided an advantage over the more ‘dispersed’ voices possessed by individual councils.

Gillian Beasley, chief executive officer of Cambridgeshire and Peterborough councils, said that no change was anticipated to the non-statutory basis of the combined authority’s spatial strategy under the devolution deal.

Jackson said that Cambridge and surrounding South Cambridgeshire council were aiming to jointly produce their next local plans.

Kovacs said that a shortage of commercial space was a pressing issue in Cambridgeshire and Peterborough. We need to provide additional commercial space to encourage the expansion beyond the combined authority of some of these high-tech businesses.”

For details of the next conferences, events and forums in the region click here, and for conferences across the whole of the UK click here.