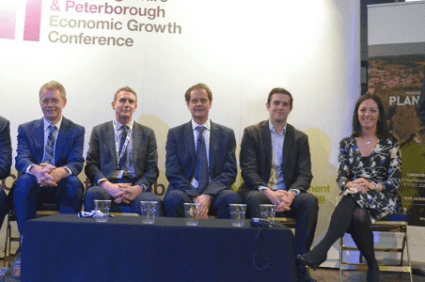 Planners will need to begin looking at Cambridgeshire’s green belt as the county’s stock of redundant airfield housing sites runs out, the chief executive of one of the county’s leading housing association has warned at a Built Environment Networking conference.

“Finding large sites will be harder in the future,” said the CHS Group’s Nigel Howlett at the Cambridgeshire & Peterborough Economic Growth conference’s housing debate, pointing to how planners had been helped in the recent past by the ‘handily located airfield sites’ in the south of Cambridgeshire being freed up following the end of the Cold War. “I’m pretty sure that looking at green belt will need to be parts of that. There are bits of green belt that certainly should not be touched around Cambridge but there are others that should be because they add little amenity or value in the wider sense.”

Howlett said that the main housing problem in Cambridgeshire was affordability, pointing to figures showing that 39% of Cambridge’s households were effectively locked out of the local housing market because buyers earned less than £30,000 per year.

Andy Hill, chief executive of Hill Residential, said that local planning policies were encouraging housebuilders to construct larger homes which didn’t necessarily meet the needs of the market. “A lot of what we provide is perhaps too large and too expensive and we need to refocus on smaller houses.”

“We would like to build more smaller houses because the market wants more but we are driven to build larger homes. We need to make them more affordable to cater for the future needs of the city.”

Hill also said that Cambridge is ‘very expensive to build in’ currently, with build costs varying from £150 per sq foot outside of the city to £270 on the developer’s high density urban extension at north west Cambridge which was feeding developers to build upwards.

Ed Ellerington, director of PRS at Grainger said that Cambridge was ‘high on the target list’ of the UK’s biggest private landlord. But he said that Grainger ‘struggled’ to develop in the city due to high land prices, which could be remedied if construction costs could be standardised. “If you can build properties for sub £110 per sq ft we would open up not only Cambridge but every other city and suddenly land price matter far less and rents are really affordable.”

Make sure you check out our next conferences, events and forums in the region here and for national events here.