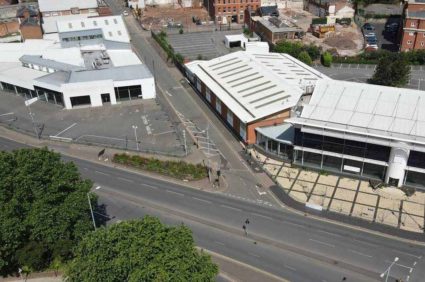 Sheffield-based developers HBD today unveiled plans for a £100m mixed-use development on the site of a car dealership in Birmingham.

Formerly Henry Boot, the company has acquired the 2.6-acre Sytner BMW dealership in the city’s Jewellery Quarter with the intention of creating a residential-led PRS redevelopment that could accommodate around 450 units.

HBD has also today confirmed the purchase of a 150,000 sqft office and warehouse facility in west Lancashire as it continues to realign its portfolio. The £4.25m Allied Business Centre at the West Pimbo Industrial Estate was financed by the sale of a newly developed Merseyside supermarket in January.

Simon Raiye, Director at HBD, said: “This is a well-known, prominent site that has become vacant so we are looking forward to putting plans together to bring it back into use. Living space is in high demand in the city’s Jewellery Quarter so we’ll be exploring plans for a residential-led, mixed use development.”

The Sytner site, which is split into two parts by a road, is the developer’s second in the Jewellery Quarter, with plans already underway for the redevelopment of Cornwall House which will feature 101 build-to-sell apartments but also incorporate ground floor commercial space.

And it is the latest in a series of acquisitions by HBD as it builds its development pipeline across urban residential, urban commercial and industrial and logistics. Other recent deals include the purchase of 60,000 sqft across two buildings in Mabgate, Leeds, and a key site in the St John’s district of Manchester City Centre. Overall the developer has established a £1.4bn development pipeline.

Ed Hutchinson, managing director of HBD, said: “These two deals are the latest in a series of acquisitions by HBD, including a key site in Manchester’s St Johns district and the purchase of 60,000 sq. ft. in Mabgate, Leeds. All of these latest acquisitions have significant future redevelopment potential and are an excellent strategic fit for our business.”