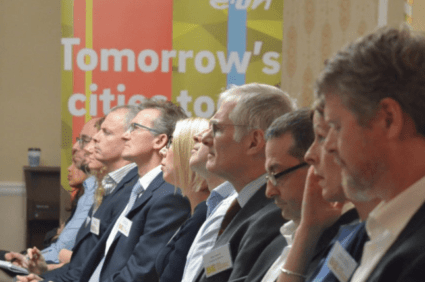 The masterplan for Manchester’s Airport City is having to be rethought due to greater than expected demand for hotel space, a Built Environment Networking conference has heard.

She said the board was due to approve a further two hotels, which would increase the total number of beds to 1600 at Airport City, which is located in Manchester’s enterprise zone. Shillaw said: “We have to rethink the CBD (central business district) with the amount of hotel space coming forward and the amount we will need. The masterplan will change as we respond to the market.”

She also said that the airport was in discussions with the prospective occupier of Airport City’s 600,000 sq ft campus building, which she said should would ‘blow your mind’ when it was announced in the new year.

The same conference heard that plans are being drawn up for the redevelopment of the land around Preston railway station as it gears up for the arrival of HS2. The city council’s chief executive Lorraine Norris revealed that the local authority is working on a masterplan for the station’s hinterland, around a quarter of which is under the control of Lancashire County Council. She said: “There is potential to have a game changing development in Preston around the arrival of high speed rail.”

Norris also said Preston is working with working with property agents Cushman Wakefield on developing a city centre residential strategy. She acknowledged that the city’s legacy of terraced housing had depressed property prices, while it lacked a city centre living profile among developers or prospective occupiers. However Norris said the city centre could be a residential development hotspot, with 30,000 students attending the city’s higher education institutions and a ‘growing range of leisure opportunities’.

In addition, as Housing Zone Preston has received access to Homes and Communities Agency funding, she said: “It’s Preston’s time to get into city centre residential development.”

Norris also told the event that the city council’s former headquarters at 74 Guildhall was being refurbished as a leisure complex, boasting a new bowling hall and Lazerquest. The building was transferred to the private sector because the local authority could not afford the building’s upkeep.

Elsewhere in Preston, she said the University of Central Lancashire was opening a new engineering and innovation centre next year as part of a £200m investment in its campus.

Tom Gilman, northern managing director of Kier Property, told the event that his company was aiming to go on site during the third quarter of next year with its scheme at Pall Mall in Liverpool city centre. The scheme for 400,000 sq ft of offices and a 200 bed hotel was a ‘really exciting opportunity’, he said: “Liverpool is desperate for grade A offices.”

In Manchester city centre, he said that the company’s scheme at 11 York Street for 80,000 sq ft of offices with retail on the ground floor was due to complete in 2019. Gilman said the existing building on the site, which Kier bought just after the Brexit referendum, had been demolished and the pre-commencement conditions had been discharged.

Stephen Walker, deputy head of asset management at Aberdeen Standard Investments, said he was upbeat about Manchester’s commercial property prospects. “The real estate story in Manchester is hugely compelling: the structural changes in terms of infrastructure, public transport and growing technological scene all makes it a very attractive place for investment.”

He said Aberdeen Standard Investments’ latest project in Manchester is Sunlight House, a 14 storey building which had been the first skyscraper to be developed in the north west when it was built in the 1920s. The real estate investor planned to ‘defurbish’ the building by stripping back the specification in a bid to attract technology occupiers, Walker said: “Anything you can do to differentiate is worthwhile.”

John Arden, director of homes at The New Charter Group, said that the Tameside-based housing association has recently completed its first outright sale project at King Edwards Court in Hyde. All 12 apartments had been sold off as planned. Arden also highlighted New Charter’s scheme at Summers Quay in Stalybridge, a 67-flat scheme which is designed to remedy the under-provision of such accommodation in the Greater Manchester town centre.