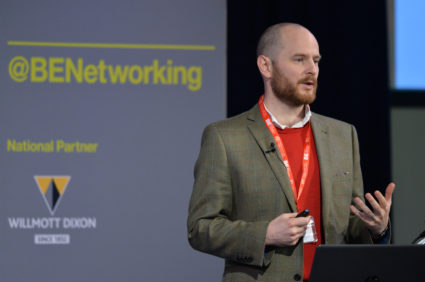 Julian Barker, head of Smart Places at British Land  described the scale of the development: “It’s 10-15 years development, it has offices, a shopping centre, but it’s also got 6000 homes and all that come with it, that includes high streets, lamp posts, bus shelters. a whole neighbourhood”

Barker stressed the importance of cooperating over future cities technology, he said: “Data is something in our industry we have been really bad at.”

They are debuting smart technology with the 100 Liverpool Street building, Barker explained the scale of smart systems: “It means its got outstanding connectivity, all of the base build systems are coordinated together in a central data environment, so we can control them and know exactly what’s happening and ultimately use AI to optimise them.”

Barker also touched on the importance of sustainability, he said: “We are never going to hit the carbon targets we need in the Built Environment unless we change the way we operate.”

Kat Hanna,  Masterplan Strategist for Lendlease concurred with Barker of the importance of future proofing developments with sustainability, she said: “It is going to become increasingly difficult to lease a building that doesn’t have the right environmental standard.”

Lendlease are producing the new 54 HA Euston HS2 station, opening up the future of transport for Central London.

Hanna noted the difficulty in getting smart technology implementation right: “No ordinary person generally says they want to live in a smart or future city, they also have different cultural expectations.”

“What you might do in a office with sensors, people might be happy about you doing that, but they might not be as happy if you did it in their new build home”

Hanna stressed the importance of “thinking beyond technology” and seeing ways to build smarter cities as a more holistic approach than just implementing tech.

Bill Hughes, Head of Real Assets with L&G described how the way the cities of the future are funded

“I personally think the world has changed dramatically since the global financial crash, that showed that the banks were not fit to fund assets for a long time.”

Hughes noted the importance of “seeing what society needs from investment” and L&Gs  commitment to what they refer to as “inclusive capitalism.”

Modmo is a market disruptor which focuses on producing volumetric modular housing, which is focused on taking on the housing crisis.

John Baker- Chief Operating Officer at Modomo, questioned the mainstream ideals within development, he said: “In the world of regeneration and development we’re constantly looking for that big leap, you go through multiple different phases of permanent development, however that rarely happens in real life, and it’s more about incremental steps.”

Baker also emphasised the importance of finding “meanwhile uses” of land while development is undergoing.

Network Rail Property have recently secured a grant of £300m to improve accessibility at 73 stations.

Rebecca Cunningham, Principal Development Management for Network Rail stressed the importance of the growing focus on accessibility, she said: “We know mobility is increasingly important, by 2041, by then a quarter of our population is going to be over 65.”

Network Rail are also supporting free wi-fi at all stations by Summer 2020, allowing for increased connectivity at stations.

Cunningham explained how Network Rail was adapting its planning philosophy to a more smart approach: “We have integrated city planning experts working on how we evolve design in stations and guide our master planning in 3 ways, designing in a way that looks beyond the asset we own and our infrastructure and start to work with others.”

ZapGo is developing a technology that would enable Extreme Fast Charging of Electric vehicles. Chris Hutchens Engineering Manager said the technology would enable electric cars to fill up like the  “normal combustion engines of today”- reducing charging times to as low as 5 minutes.

The future of cities is not static, and smart city ideas are actively beginning to open up and change developer mindsets. Smart technology is also facilitating better, more sustainable development.