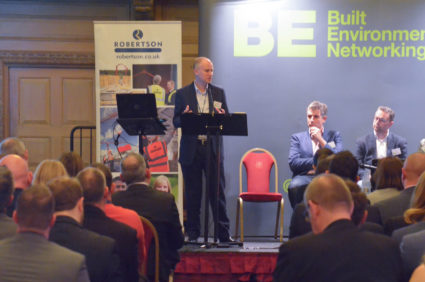 Leeds will be pushing for its own conference centre in a bid to put the city more firmly on the map, the council’s chief executive has told a Built Environment Networking conference.

Tom Riordan told the Leeds & West Yorkshire Development Plans event in the city last Wednesday that the ‘time is right’ to consider a conference and exhibition facility. “We need more people to see the city. There are two ways to do that: a conference centre or great big tourist attraction. These are two things we will be going for in the years ahead.”

But he told delegates that Leeds was “very mindful of not cannibalising Harrogate”, which has Yorkshire’s biggest conference centre.

Riordan also said Leeds was seeking to create a conference centre that would be ‘digitally enhanced and an extremely state of the art’ facility. He added that the And he said a new facility would not ‘not necessarily’ be developed in the city’s South Bank regeneration area.

Beyond the city centre, he highlighted plans to build a new train station to serve Leeds Bradford Airport, which could act as focal point for a park and ride facility in the future.

Riordan also expressed his frustration over West Yorkshire’s aborted plans to set up its own devolution deal. “Devolution is a challenge and is very frustrating. We were ready to go with a deal and we are still ready to go.”

He said that the announcement in the Budget earlier that day of a £1.7bn Transforming Cities infrastructure programme, half of which will be allocated on a per capita to areas with metro mayors, was a “definite incentive for places that don’t have devolution deals to get one.”

Simon Gawthorpe, managing director of Urban Splash, told the event the £34m allocated for construction skills in the Budget had been a ‘missed opportunity” given the scale of the industry’s training requirement.

He also said that the regeneration specialist’s modular House homes were taking longer to deliver than anticipated. Gawthorpe said that the company had planned for a five-week process, divided between two in the factory and three on site. But while he said the factory phase was on track, it was still taking ‘too long’ to deliver on site even without additional delaying factors, such as securing utilities connections. However, he said the on-site times were ‘getting there’ adding that modular construction had ‘got to be the way to go.’

Geraldine Howley, chief executive of the Incommunities Group, reported that at a recent meeting with Alok Sharma, the housing minister had expressed interest in regeneration, which she said had recently become a ‘dirty word’ in some circles.

She said that the association, which was created following the stock transfer of Bradford council’s housing stock, was due to demolish eight tower blocks this year in a bid to tackle the oversupply of apartments across the city and free up land for family homes.

Howley said: “We have areas where Asian heritage communities that don’t require tower blocks are seeking to future proof by taking out a lot of properties and starting again. We had homes in the wrong locations that were no longer in demand,” she said, noting that Incommunities had sold two flats in tower blocks for £15,000 apiece to tenants under the right to buy.

Andrew Cobden, managing director of Vastint UK said the international real estate company was close to finalising consent for the former Carlsberg brewery site in Leeds, which it bought off the Danish multinational in late 2015. He said Vastint had secured a resolution to grant permission for its first application, which was submitted last May was now ‘waiting to finalise the final bits’.

Cobden said that the Dutch-based company had rejigged the masterplan it had inherited for the 6.7 ha site, which is centred on the former Tetley brewery in the South Bank area, by reorienting the scheme on an east-west axis in order to open up links to poorer neighbourhoods in south Leeds.

Vastint are ‘keen to get moving’ on the project but that construction was due to commence in 2019, whilst the revised masterplan has also increased the proportion of parkland from 25% to 30% of the overall site.