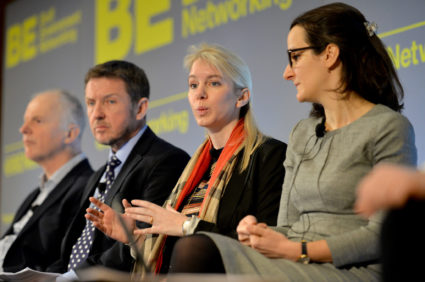 Transitioning to carbon neutrality. Powering the economy of the future. Incorporating the technology of the 21st century. The UK energy system is in the midst of perhaps the biggest transition the energy sector has ever faced.

For the first time in January 2019, renewables made up a bigger part of the energy mix than fossil fuels, according to Clara Semal, Electricity Transmission Network Manager at National Grid – who was speaking at our Building the UK’s Energy Future Conference.

The change of pace is rapid with National Grid rolling out a major £1.3bn programme to improve grids to “make sure the lights stay on” – Semal told delegates.

Joe Howe, Chair of the North West Hydrogen Alliance and Executive Director of Thornton Energy Institute, proposed a move towards a more regional approach to allow grid flexibility: “We need to shift away from national grids to more decentralised grid systems like we’re looking at in the North West.”

Electric Vehicles (EV) and widespread adoption of battery technology have also been transformational, with Semal noting that EV manufacturers are having to invest heavily to prepare the grid for the transition.

Ged Barlow, Chair of the Cheshire Energy Hub & Energy Innovation District, warned about the dangers of the redesign of energy infrastructure as providing potential: “The system can’t currently cope if everyone jumps into an EV, but developing that energy storage is a massive opportunity.”

Hydrogen cars have been suggested as a potential alternative to plug-in to reduce the strain on grid infrastructure.

Marija Simpraga, Infrastructure Strategist with L&G Investment Management, said: “Smaller and lighter vehicles will have an uptake towards battery and plugin in, and for larger vehicles where batteries don’t work because of scale, there will be a role for hydrogen.”

Howe agreed with Simpraga over the likelihood of both having some uptake: “There’s a marketplace for both. Different technology is popular in different parts of the world. Hydrogen is more popular in Japan, whereas plug-in has been the mantra over here, this isn’t a case of VHS and Betamax, there’s a role for consumer choice and both will be available in the future.”

The climate crisis has adjusted the mindsets of developers, energy companies and investors, and Simpraga discussed L&G’s early adoption of green investing: “We did it before it was fashionable, before Greta and Extinction Rebellion. About 7 or 8 years ago if you got asked as an investor about the environment all you’d get is a few checkboxes.”

Simpraga said that while others in the sector have found investing in energy daunting, there was “never a better time” to invest, and they had made their largest single energy investment recently – which totals £400m.

Semal expressed positivity about solar energy and how it can be a model for other emergent technologies: “There’s been a 90% cost drop in just a decade. That’s a tremendous price decline and we need to replicate this model for Hydrogen and Carbon Capture. We need to use it more and when there’s a market, competition will drive prices down.”

Barlow noted that there had been local interest from councils in Cheshire in investing in solar. He also suggested that small nuclear reactors could be used to power industrial sites in a carbon neutral way.

The transition away from fossil fuels is perhaps the largest the UK energy sector has ever faced and finding solutions for the grid, storage and achieving enough renewable generation are still vital issues for the sector to overcome.