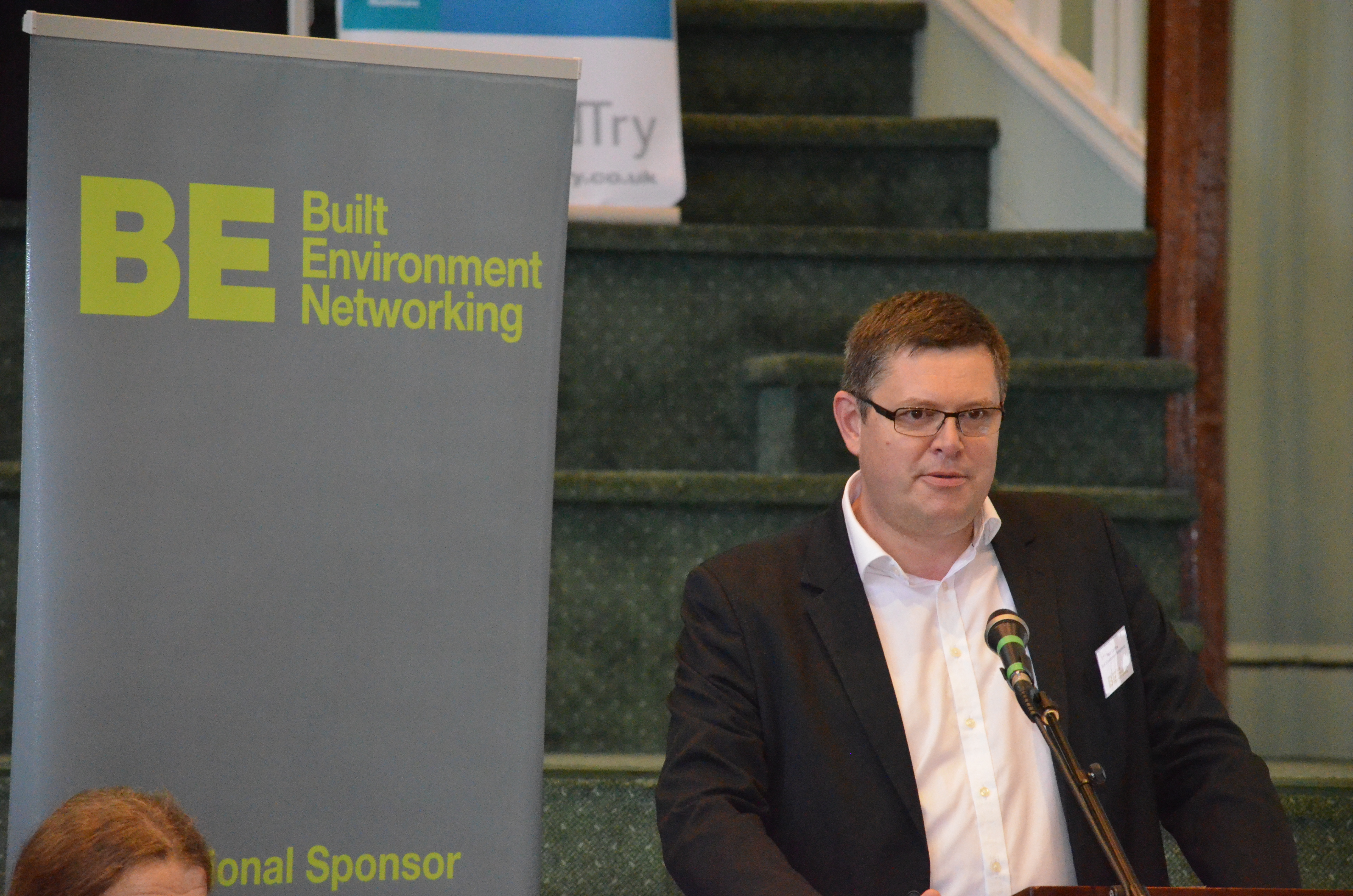 Coventry’s Friargate development is a scheme of potentially European significance, the scheme’s developer has claimed.

Delivering the closing keynote presentation at Built Environment Networking’s Coventry Development Plans 2014 event, Stephen Reynolds said: “I can’t think of another city that can put forward 36 acres of developable land by a railway station. This is at least- a national schemes it not European. Three million sq ft next to a railway station is future proofing the city.”

“(Coventry) has traditionally been very good at attracting inward investment because of its road connections. We are trying to do that with rail connections, which are very good.”

He outlined at the event, which was organised by Built Environment Networking, how the scheme will redevelop an area of long-derelict office buildings in front of Coventry railway station.

Together with the nearby ring road junction, the blocks have formed a barrier between the station and the city centre for many years.

He explained that the 15-year Friargate project is “ trying to re-establish connections between the station and city centre” by taking out the junction.

Instead of walking through underpasses, pedestrians will be able to pass through a wooded area to bus districts in other cities

According to the masterplan for the Friargate site, a boulevard will run from the station towards the city centre. This road will be flanked by hotels and office buildings with bars and restaurants on the ground floors. The 36 acre site will also include residential development. The area also benefits from a district energy scheme that will help the scheme to ensure that the buildings delivered are low carbon.

Reynolds said that Friagate is currently in the last round of an OJEU bidding process to let the contract for the first of the new office buildings, which Coventry council has said it will occupy.

He said the contractor for this first building will hopefully be chosen by November, that they would be on site by April and the building completed by the first quarter of 2017. He added that Friargate was talking to potential occupiers about a second speculative building.

He added that demolition had begun to the 70s office buildings that occupy the locations of the offices and public realm that make up the second phase.

Coventry’s civic leaders have decided to expand onto the surrounding green belt land in order to meet the city’s growing housing needs.

Coventry City Council assistant director of planning Colin Knight, delivering the opening keynote presentation at the Coventry Development Plans 2014 event, said that the council’s housing market assessment had revealed a need for 36,000 new dwellings by2031. This increase on the current planned rate of construction would see the city’s population increase to 400,000.

“The politicians said we would go for growth on the green belt. I’m pleased to say that the politicians have the balls to take this forward.”

Knight pointed to figures showing that Coventry’s housing delivery and plans compared favourably with Milton Keynes which has been identified as a major housing growth hub.

He said that in addition to providing more housing, Coventry would also be seeking to improve the quality of the city’s stock, nearly three quarters of which is classed in council tax bands A or B, compared to a national average of 43%. He added that the proportion of housing stock, which is detached, is also significantly below that of neighbouring towns, like Nuneaton.

Knight hoped that better housing would encourage a greater proportion of Coventry’s higher paid employees to live as well as work in the city. “The city is haemoragging cash,“ he said, pointing to figures showing that those who worked in the city but lived elsewhere earn 80% more than those who both lived and worked in Coventry. “We want people who get good jobs in the city to stay and live here. “

He said a symbol of the council’s commitment to its ‘city centre first’ policy was the decision to become anchor occupier of the Friargate scheme in order“to get things moving.”

Knight said the council is also in the midst of ambitious plans to upgrade the city’s transport infrastructure.

These include the comprehensive rebuilding of junction 1 of the city’s ring road, as part of which a footbridge running across it has been taken down, allowing pedestrians to cross on the level road. He said that the improvements to this road junction had improved access to the adjacent canal basin, opening up opportunities for development of what he described as Coventry’s answer to Camden Lock.

Elsewhere, the council had pushed ahead with controversial plans to cut the road space at a 5 lane road junction by using Dutch shared space principles. He said the success of this project in reducing accidents meant that it had now become a model for other pub realm improvements in the city centre.

In a further bid to rebalance the city’s traditional reliance on the car, Knight said the council had won local growth funding to carry out work to its grade II Rail station, which was experiencing faster passenger growth numbers than any other outside London

Andrew Macdonald has never seen as much central government focus on a development as that being paid to the MIRA technology park, near Coventry.

Speaking at BEN’s Coventry Development Plans 2014 event, Swanvale Development Limited managing director Macdonald outlined plans to triple the amount of floorspace on the park, which dates back to 1946. Swanvale, the property arm offshoot of MIRA, is taking forward the redevelopment of the park.

The park was originally developed after the war as a road test facility to support the surrounding west midlands region’s automotive sector. Its facilities remain ‘world class’ according to McDonald.

A planned redevelopment of the site is set to turn the estate into new campus-style Technology Park. Besides assisting the continued growth of MIRA as a world-class centre of automotive transport research and engineering, the project is also designed to attracting other related R+D companies to locate in the midlands.

Macdonald described how government ministers have queued up to visit the facility, including business secretary Vince Cable and communities secretary Eric Pickles.

“I’ve never seen such central government focus, largely because of the industrial sector,” said the ex-Scotland rugby international, referring to the park’s focus on the automotive industry, which has increased production from 1m to 1.6m vehicles per annum since the turn of the decade.

And he said MIRA ‘s facilities meant it was better positioned than the vast majority of business parks to capitalise on this growth potential.

The £300m development will provide a total of 1.5m sq ft of research and development within the new MIRA technology Park which includes the redevelopment of the existing MIRA headquarters buildings.

In addition the new MIRA Technology Park will include hotel, retail and leisure amenities of 7,000sqm.

In 2012, MIRA secured enterprise zone status after which it won outline planning consent for the 1.5m sq ft of predominantly B1 and research space. To help deliver this additional floorspace, the park has secured regional growth funding to upgrade its road links, as part of which work has already begun on dualling the A5. The park’s long-term aim, said Macdonald, is to grow its annual turnover to £100m per annum.

On-site the park is due to open a new spine road, which once complete will open up 100 acres of oven ready sites for development. He added that the nature of the reserved matters consent meant new facilities could be brought forward in a very flexible way.