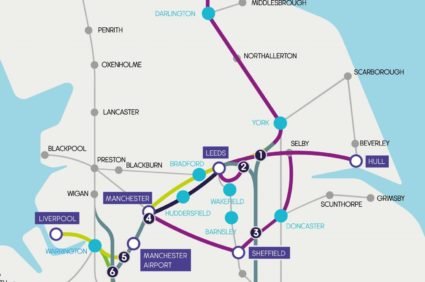 A plan, outlining the need for a far-reaching overhaul of the rail system, has been submitted to the government this week by northern transport leaders.

The £40bn Northern Powerhouse Rail blueprint is a joint venture between Transport for the North and the Department of Transport and if implemented would radically improve the region’s ageing rail network, in turn creating thousands of jobs, economic opportunities and helping slash carbon emissions.

It comes ahead of publication of the Government’s Integrated Rail Plan. Anticipated later this month, it’s expected to set out the long-term investment plans for the North’s rail upgrades as well as details on how the projects will be delivered.

Tim Wood, Northern Powerhouse Rail Director at Transport for the North (TFN), said: “This is the culmination of years of work on the original Northern Powerhouse vision to radically connect the North’s communities by rail; create jobs; and boost the northern economy for decades to come.

“Communities and businesses want to see certainty on what will be delivered and when in order to make key investment decisions and create new opportunities.

“We hope that the significant body of evidence, worked up alongside the Department for Transport, will be reflected in an ambitious commitment to investment in the North in the Government’s Integrated Rail Plan. We can then swiftly press on with joint delivery for the Northern public. We’ve done the work together, now let’s get on and deliver for the North together.”

TFN hopes improvement work will start in the mid 2020s and be completed by 2060 and its plan also spells out the need for a mix of new lines and major upgrades including electrification on the network spanning from Liverpool in the west to Hull in east. Other major proposals include:

Mayor of Greater Manchester, Andy Burnham added: “This Government were elected on a promise to level up the North of England and whether Ministers back this vital project in full will be a key test of that commitment.

“This is absolutely not the time to be scaling back on ambitions for Northern Powerhouse Rail and people here will not accept yet another second-class solution.

“Northern Leaders stand ready to work with the Government to make swift progress on this project and, at the same time, deliver the promised additional investment in day-to-day transport services that is long overdue here in the North.”