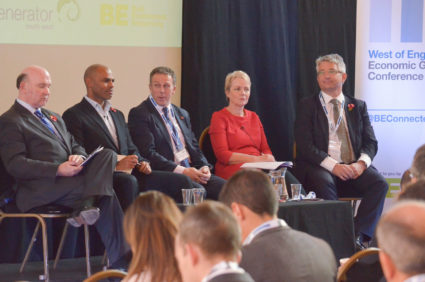 The west of England’s local authorities are hatching plans for a Bristol Tube, the city’s mayor has revealed. Speaking during the devolution panel debate at BEN’s west of England conference, Marvin Rees said that a pre-feasibility study had been carried out into creating a mass transit system for Bristol and the surrounding area.

He said the mass transit, which may incorporate both overground and underground rail, would be a ‘game changer’ for transport provision across the city region.

Rees also told the event that next October Bristol would be hosting the Global Parliament of mayors. The most recent meeting of the parliament, which he had recently attended in New York, had seen strong backing for devolution, he said: “The world has moved on from national governments: the key challenges cannot be dealt with by national governments acting alone and to catch up we need genuine devolution and have to look at networks of cities.”

Rees said it was ‘self-evident’ that the west of England’s constituent parts are inter-dependent in areas like housing and transport.

And residents across the west of England would suffer if the city-region’s local authorities failed to work together effectively, he added: “We are driven to work together because we are dealing with the reality of the travel to work area. If we don’t do it right across the patch, we all pay the price.”

As an example, he pointed to how air pollution in Bristol, if increased numbers of people drove to work in the city centre, would have knock-on consequences for health. “A failure in one area leads to cost in the health service: inclusion and sustainable growth makes economic sense in the long term.”

Tim Warren, leader of Bath and North East Somerset council, said that joint working between councils made sense because businesses did not operate according to local government boundaries.

Tim Bowles, mayor of the West of England Combined Authority (WECA), said that while the voluntary arrangements between the city region’s authorities had achieved some success they had been found ‘wanting’. “There have been tensions,” he said.

Bristol also needs to find a way of rationing access to its congested road space, according to First Bus managing director James Freeman. Speaking on our Transport panel he said that the city-region was constantly threatened by gridlock. “The issue now is that network is so saturated the smallest accident brings it to a halt and everyone’s lives are halted for the day.”

He said that any attempt to introduce congestion charging was likely to meet resistance. “If you do something that appears to be against the motorist you get voted out,” he said.

But the West of England needed to consider radical solutions to congestion, he said: “We have to do something to ration the road space.”

Andrew Page- Dove, south west regional director of Highways England, said that the agency was seeking imaginative ways to better exploit the strategic roads network. As an example, he pointed to the opening in the week running up to the conference of a bus lane on the M32 motorway.