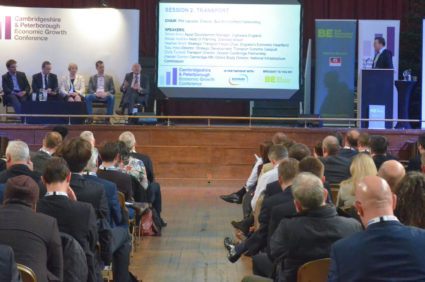 The Oxford to Cambridge growth corridor could be the ‘missing link’ in forging a new east-west transport spine across southern England, according to one of the initiative’s key architects.

Alistair Gordon, director of the National Infrastructure Commission’s Cambridge-MK-Oxford study, told the Built Environment Networking conference that the exercise had implications beyond its geographical terms of reference. “We potentially see it as the first step in a strategic corridor that could take you all the way from East Anglia ports to the west of England and south Wales. It’s a missing link rather than a defined geography.”

Heather Smith, chairman of the strategic transport forum of councils in England’s heartland region, said at the Cambridgeshire & Peterborough Economic Growth Conference that the western section of the re-opened Oxford-Cambridge rail route was due to be completed by 2023. The route of the central section of the Oxford to Cambridge had not yet been finally defined and was unlikely to be delivered until the mid-2020s, she added.

Smith said that the final route for the Expressway road, linking the two university cities, was expected to be determined in 2019 following the publication of proposals next year. She acknowledged that the timetable for designating the corridor was frustrating for developers who had sites along the route. “It’s quite difficult for housing authorities because the whole area is high growth and there is massive demand from housing and pressure from developers targeting sites.”

Gordon said that authorities needed to maximise the ‘once in a generation’ opportunity offered by the creation of the Oxford to Cambridge transport corridor. “The design and routing of these schemes are vital to tackling some of big challenges these areas face. The value of these schemes will be maximised if they facilitate housing growth in urban extensions and new settlements.”

He added that the NIA’s strategic view was that the number of stations along the east-west line should be limited with commuters brought onto the network by feeder services. “We would like to see faster links but local people would like to see more stations,” he said, adding that the NIA was launching a study with Network Rail and local councils into the provision of new rail stations in the Cambridgeshire stretch of the new east-west line.

He also suggested that local authorities in the Oxford to Cambridge transport corridor should explore setting up joint planning committees to achieve better join up planning for jobs and housing.

Smith said the forum’s authorities were ‘working towards’ establishing a sub-national statutory transport body which could bring in access to additional funds for the area’s road and rail networks.

For further details on regional conferences, events and forum click here, and for all other future events across the UK click here.