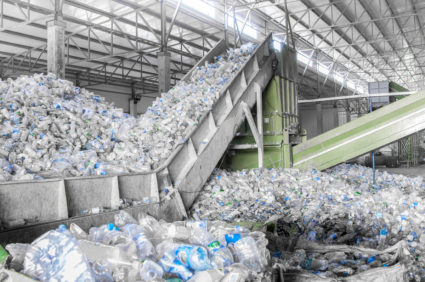 Cheshire West and Chester Council’s have given the green light for Peel NRE to develop the UK’s first plastics recycling park for Protos Place Park at Inces Marshes. The £165m scheme, near Ellesmore Port will create more than 250 jobs for the local economy and process 367,000 tonnes of plastic each year.

In detail the 24-acre development will deliver:

• A second 17,545 sq m PRF which will recycle 90,000 tonnes per annum of pre-sorted waste plastics into recycled flaked plastics for re-use in plastics manufacturing.

• A polymer laminate recycling facility which will recycle 2,500 tonnes a year of plastic aluminium laminates from products such as crisp packets and baby food pouches by splitting them into aluminium and high-value oil for reuse in plastics manufacturing, using a microwave pyrolysis process.

Each of the new facilities will be run by independent operators and once established there will be up to 173 daily HGV movements at the site, which will operate 24 hours a day throughout the year. One objection was received to the proposals from the public.

Committee member Cllr Gina Lewis questioned if there would be an upper limit on HGV movements, she said: “In the comments from Helsby Parish Council they do ask whether there is a cap coming from this particular whole site and whether this does fall within that cap?”. Officers said there was a cap and they would be maintained under planning regulations.

The meeting was told it is currently unknown who will operate the new facilities or where the waste will come from. The plans were unanimously approved.

Richard Barker, Development Director at Peel NRE, part of Peel L&P, said afterwards: “It’s great to get unanimous backing for the Plastic Park – a UK first that will underpin the circular economy in the North West. It’s imperative we deliver creative solutions to the UK’s plastic problem.

“This project clusters recycling technologies in one place so that we can make the most of a whole range of plastic materials arriving on site, avoiding the need to ship them to different facilities around the region. It’ll mean we can cut down on vehicle movements, create 147 new jobs and deliver essential infrastructure to underpin a North West circular economy that’s much more sustainable.”

“We’ve planned Protos as a holistic destination to support the UK on the road to net zero. With the recently announced Protos CO2 network, linking to the proposed regional carbon capture infrastructure, the Plastic Park is just another example of forward-thinking development that responds to the dual-challenge of reducing our waste sent to landfill, whilst cutting carbon emissions.”