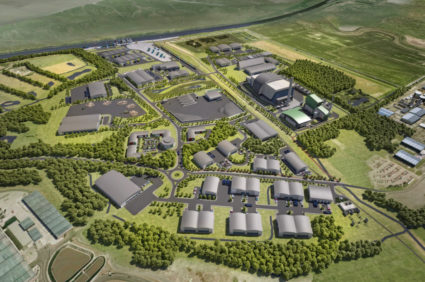 Near Ellesmere Port in Cheshire, a new energy park is being created by Peel Environmental, an arm of North West development giant Peel Land & Property.

The park is pioneering emerging energy generation technologies, and looks to be a blueprint for the rest of the UK.

Protos energy park has just secured the development of the UKs’ first waste to hydrogen plant, which complements an existing biomass generator and energy recovery facilities.

The site currently has around 150 acres of development, but with 700 acres of developable land the scheme could be transformational. Speaking at our Building the UK’s Energy Future Conference Jane Gaston, Development Director at Peel Environmental, explained: “We’ve been actively developing the site out since 2015 and we’ve already invested around £170m, which has opened up about half the site.”

They are looking at expanding into geothermal energy, Gaston explained: “We have a huge project which are delivering in partnership with British Geological survey, which has been described as a Jodrell Bank for the subsurface, to tap into what’s happening under the ground-  with the potential to look at geothermal.”

Another pioneer of emerging energy technology is Brockwell Energy who are a Scottish energy firm with an £800m investment portfolio – focused on energy from waste, onshore wind and flexible generation.

They are also developing an energy park at Westfield, with planning granted back in 2019. They’re using an energy from waste plant as an anchor for wider regeneration of the site, and they’re seeking two additional sites for such plants.

Alex Lambie, Chief Executive of the firm spoke about funding difficulties within the sector: “We have spent over 10 years trying to get a stable investment thesis from the department of energy.”

Lambie called on the need for the government to have a central energy institution: “The government at the moment needs a framework.”

He devised that the government needed a central “brain” to direct the future of the energy mix.

Canary Wharf Group are the firm that has been behind the startling development of Canary Wharf area in London from a dilapidated former dockland into one of the world’s most prominent business districts.

They are taking on the challenge of achieving a carbon neutral district, having declared that all their new buildings will be net carbon neutral, with the goal to eventually achieve carbon negative buildings.

Kristina Arsenievich, Senior Sustainability Consultant for the Group, said: “We have science based targets that we have set out, looking at opportunities and that the opportunity assessment on each building is considered to what we are trialing.”

Canary Wharf Group are also carrying out a major retrofitting programme on their existing building stock.

National Grid is developing a “motorway of charging” to prepare for the hundreds of thousands of new electric cars which will dominate the future of car travel, in anticipation of the ban of all new petrol and diesel cars by 2035.

Clara Semal, Electricity Transmission Network Manager, said: “We still have far to go, around 80% of the charging in the UK is done at home and only 3% of charging points in the UK are ultra-rapid charging points.”

Semal echoed Lambie’s call for more direction in the energy section, calling for a centralised energy strategy, praising Germany’s approach to decarbonisation: “Germany has Energiewende which is a kind of a political plan of what the power system will look like.”

Developers are bringing all kinds of exciting projects forward, yet it is clear that the UK government needs to develop a better direction to allow development to move in the right direction, and a better mechanism of funding to enable that to happen.