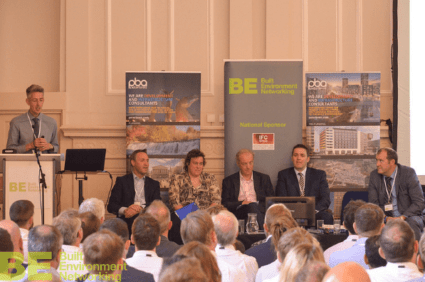 Planners are examining options for the future of the Thames Valley’s business parks as younger employees favour more central work locations, our conference has heard.

Andrew Hunter, Chief Officer for Planning, Transport and Countryside at Bracknell Forest Council, told the Berkshire and Thames Valley Development Plans Conference that the issue was on the authority’s agenda as it prepared its new local plan.

The blueprint, which will cover the period to 2036 and is due to be examined in September, is wrestling with the area’s emerging over supply of our of town business parks, he said: ‘’You can’t attract young talent to these kind of buildings, they want to be in town centres and near connections to transport. It’s quandary for us because we have a lot of that type of workspace.’’

Alison Bell, Director of Environment and Neighbourhood Services at Reading Council, said that the allocation of office space in the authority’s current plan is more than double the 53,000 sq m that it now thinks it needs.

A new railway station at Green Park, which will serve the 1,000 homes being developed by Berkeley Homes set to be completed this summer, would also support the adjoining out of town business park, she said: ‘’Without a station, the business park will be reliant on people driving cars. People are looking for a different offer around employment space.’’

Commercial development is ‘not as easy’ as housing the bring forward in Bracknell, said Hunter: ‘’Everybody wants residential but commercial is more difficult.’’

Bracknell Forest is seeking to expand its post-war town centre, where a number of commercial and residential schemes are being progressed with developers and architects, by downgrading the ring road that encircles it, he said: ‘’The long-term aspiration it to open up the concrete collar and really expand the town centre outwards.’’

The town centre has bucked the trend of declining retail following the recently completed redevelopment of a third of its town centre. The next stage is ‘The Deck’, which is designed to link Bracknell’s old covered shopping centre up with the new scheme.

Beyond the town centre a number of mainly greenfield strategic sites to the north and east of Bracknell have been identified to meet to local plan’s target of 13,000 new homes by 2026.

Bell said Reading Council is ‘very pleased’ to attract US private rented developer Lincoln MGT to choose the town for its first UK scheme ahead of bigger centres like London. The council are now discussing the development of Station Hill with Lincoln MGT, a site which currently has consent for up to 550 residential units and 13,000 sq ft of retail floorspace, with Bell saying: ‘’Housing is going to be an issue: retail is very important so we will be working with them to make sure we get that.’’

The authority is just about to consult on the development brief for a 6-ha site at Hosier Street, which is owned by the council and property company Moorgarth. Reading hopes to adopt the brief, which earmarks the town centre site for more than 1,000 homes and features a 20-storey town clock with retail on the ground floor, in the autumn.

The council are also still negotiating about the development of Royal Elm Park on the former Reading FC car park – with a mix of hotel, multi-storey car park and public transport interchange being granted consent in 2017.

Ewan Montgomery, Portfolio Manager of UK Real Estate at Fidelity Investment International, told delegates that the opening of the Elizabeth line would be ‘transformational’ for the Thames Valley occupier market, increasing the number of commuters living within a half hour’s travelling time of Reading Wokingham by 30% and 54% respectively.

Fidelity is planning to improve the branding and external appearance of its recently purchased town centre Phoenix House office block in Reading to enhance its appeal to the media and tech employees it potential occupiers are targeting.

Montgomery said that Bracknell Forest’s council’s plans to broaden its town centre would be ‘fantastic’ for the scheme.

Tim Smith, Chief Executive Officer at the Thames Valley Berkshire LEP said the body is looking at options to finance the tunnel for the western relief and southern rail links with Heathrow.

A development consent order for the western link is due to be submitted in June next year with a decision anticipated by November 2020. That would allow a six-week window for a potential judicial review, enabling works to take place in early 2021 and main construction to commence in 2022. Boring the tunnel would take approximately 15 months – with the link being complete by 2027.

Work will also go ahead to make improvements to the M4 between J8-J9 and J12, which would start in July and be complete by March 2022.

Smith said the LEP had also launched a productivity commission, a consultation draft of which is due to be published at the end of November.

Andy Dicker, Technical Director at Legal and General Homes, tole the event that the insurer’s recently launched housing development arm had submitted to Wokingham Council phase one of its plans for 1,500 homes in the Berkshire village of Finchampstead.

The first show homes however have been delayed by six weeks due to severe weather conditions during the winter.

He confirmed that L&G will go to tender on facilities such as schools and surgeries where it has less expertise.

Rupert Batho, Commercial Director at Frasers Property UK, said that the Singapore-based investor had acquired five business parks, covering 3.6m sq ft, in the Thames Valley over the last nine months as part of a £1bn investment spree in the UK.

He said that opportunities to upgrade the Winnersh Triangle business park, which is located off J10 of the M4, include the replacement of industrial buildings with 130,000 sq ft of offices or business space.

Fraser is also looking at increasing the floorspace at 1040 Winnersh Triangle, which currently has detailed consent for 105,000-125,000 sq ft.