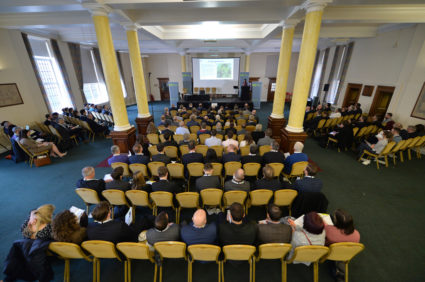 Lex Cumber, Director of Cardiff-based Castleoak, told delegates at our South Wales Development Conference that big stores like House of Fraser contain a lot of floorspace that could be converted to house older people: “Some housing for older people in buildings like that would work with retail and services on the ground floor.”

And the baby boomers, who are now entering retirement, have an increasing appetite for urban living rather than retiring to the seaside, he said: “They are not going to put up with a beige box where they will be expected to wait and die.”

By 2033, 26% of the total population of Wales will be 65 plus amongst whom those aged over 85 are the fastest growing group, Cumber said: “We are in danger of not paying attention to the demographic.”

Developers that don’t include retirement or assisted living provision in their schemes are ‘missing a trick’, he said: “It should be one of the top three things you should be looking at.”

Eight in ten elderly people own their own homes outright, amounting to approximately £1.2bn of equity that could be released in Wales alone, but he said that the specialised retirement sector is very small in the UK compared to countries like New Zealand and the US.

And the country’s care home stock is ‘depleting ‘and ‘overwhelmingly out of date’ with just a fifth of purpose built for elderly people.

Matt Phillips, Managing Partner at Knight Frank, told the session that escalating construction costs are a big problem for the viability of development in south Wales: “Development is really tough: build costs in south Wales are the same as in the south east but the rentals are half,” he said, explaining that the cost of constructing grade A space had increased from around `£125 per sq m to more than £175 since work began on Cardiff’s Central Square development.

Although development finance is ‘pretty much non-existent and ‘increasingly expensive’, Phillips highlighted the Government Property Unit’s decision to take the biggest ever pre-let in Cardiff for 260,000 sq ft in a new building at Central Square, which is due to be completed in December. And insurer Admiral has occupied 70,000 sq ft in the city’s Capital Quarter, just before Christmas.

Beyond Cardiff, he said there had been a lack of new industrial space in south Wales since the Welsh Development Agency was wound up in the early Noughties, but rents for industrial space are starting to increase and St Modwen is planning to build a further 150,000 sq ft in two new buildings at its Celent business park in Llanwern after securing tenants for an equivalent amount of floorspace.

Transport for Wales is taking 70,000 sq ft in the Taff Vale scheme in Pontypridd, which is being directly developed by Rhondda Cynon Taff council. The scheme includes another 35,000 sq ft of speculative office space along with a community library and other uses.

Meanwhile at Cardiff Parkway, a joint venture including Investec and the Welsh Government is delivering a scheme with capacity for 3m sq ft around the new train station. The first phase comprises 300,000 sq ft of offices and the new parkway train station, which will be a stop for mainline services as well as helping to connect up Cardiff’s suburbs.

Andy Mallett, Development Director of Garrison Barclay Estates, outlined the company’s progress on the project it is carrying out to redevelop GE’s site in North Cardiff. He said that while half of the site has been leased back to GE, the rest has been broken up into offices which have let very quickly with much interest in the site from science related business.

In Newport, Mallett said that Garrison is converting the former post office on top of the city’s mainline railway station to create 254,000 sq ft of incubator space. He said the lower costs involved in refurbishment mean that the scheme can be let out for £16-17 per sq ft, enabling the city to compete with the higher rents being demanded in Cardiff and Bristol.

Mallett said the company’s scheme at Chartist Tower in Newport city centre, where confidence has been boosted by the scrapping of the Severn bridge tolls into Wales, had received planning permission.