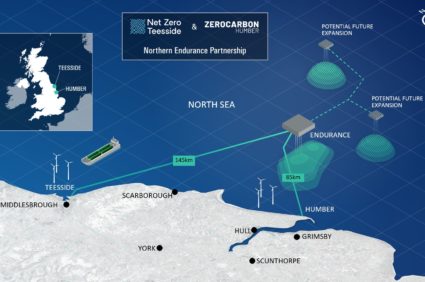 Two North Sea-based initiatives that have joined forces to facilitate the capture of carbon dioxide were awarded more than £73m by the government today as part of its £1bn low-carbon capital grants announcement.

Net Zero Teesside (NZT), a consortium of the world’s largest oil companies led by BP, has also partnered with Zero Carbon Humber (ZCH), which is receiving £21m. Together they have formed the Northern Endurance Partnership, which aims to develop an offshore pipeline network and permanently store captured carbon dioxide emissions deep underground.

Teesside Mayor Ben Houchen said: “Along with our research and innovation in hydrogen and the recently announced GE Renewables Energy facility also coming to Teesworks, our region is now the go to place for clean energy.

“This latest funding boost shows the confidence in, and commitment to, this project which will play a huge part in delivering the Governments ambitions for the UK to be the first net zero country in the world.

“This project could have gone anywhere in the world, but came here because we have the skill, expertise, workforce and site to make it a reality. With the recent announcement that we will be home to the UK’s largest Freeport, this will only encourage more businesses in the clean energy sector to invest and regenerate our site and wider region.”

The awards were two of five made to similar schemes. Mersey, North West Scotland and Wales regions were also selected.

NZT aims to be up and running within the next five years and, when complete, it could create 5,500 direct jobs during its construction and add £450m to the economy each year. The scheme plans to capture up to 10million tonnes of CO2 emissions each year, equivalent to the emissions associated with the annual energy use of up to three million UK homes.

ZCH will develop H2H Saltend, one of the world’s first at-scale low carbon hydrogen production plants, and a CO2 and hydrogen pipeline network connecting to industrial sites and gas and biomass power stations throughout the Humber, enabling them to capture their CO2 emissions and/or to switch to low carbon hydrogen.

Martin Cook, Senior Vice President for Business Development for National Grid Ventures, a partner in ZCH and NEP, said: “These awards represent an important milestone as we look to decarbonise the UK’s largest industrial heartland and build a globally competitive platform for economic growth in the North of England.

“Teesside and the Humber offer the potential for a unique mix of technologies and scale to achieve net zero, delivering significant value for money. National Grid will use our knowledge and experience of gas and electricity transmission infrastructure, and our capabilities developed on previous CCS projects, to deliver the infrastructure required to enable industry to achieve deep decarbonisation.”

The Industrial Decarbonisation Challenge, funded as part of the ISCF, is the Government’s flagship challenge-led innovation programme, run through UK Research and Innovation (UKRI), a non-departmental public body sponsored by the Department for Business, Energy and Industrial Strategy (BEIS). Around £2.6bn of public money has already been invested through the programme in projects from all sectors to tackle big societal and industrial challenges.