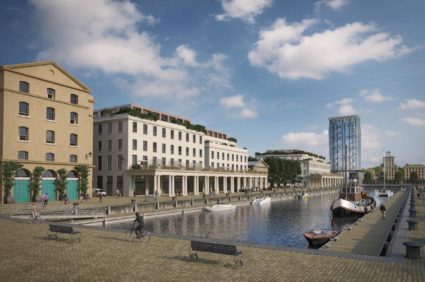 Formerly a giant oil-fired power station, with a landmark 200m chimney, this Hampshire seaside spot seems like an unlikely site for the development of a quaint town.

Fawley Waterside as it will be called,  has become earmarked the site of a planned community, which will contain 1500 new homes, community facilities, a hotel  and mixed-use commercial space.

Speaking at the South Coast event, Chief Executive Aldred Drummond layed out the principles that underpinned the development:  “The aim of the this transformation is to build one of the most beautiful towns in England, with proper economic purpose, it’s not an urban extension or a commuter town for Southampton its a place where homes mix comfortably with commerce and being at the scale where everything is walkable.”

The developers are seeking government investment to enable the development, Drummond explained, “Just a £200m investment mostly in road but hopefully also in rail, will unlock £3.5-4bn worth of private sector investment, a 20 times multiplier.”

Fawley Waterside is designed to be a self-sustaining community, with “80% of what you need on a daily basis available in the town”, according to Drummond.

The South Coast is home to a raft of innovative schemes housing, and the town of Worthing is about to receive, the first development by modular construction specialists, BoKlok.

A joint venture between major Swedish firms IKEA and Skanska, it was founded following a housing crisis in Sweden in the late 90s, and has been expanding in the UK over the past year, following a realisation of a similar need for low-cost, sustainable quality homes.

They have secured 600 plots across the UK and are targeting their homes at the key worker couple demographic, and they are planning to be onsite at the Worthing site by Q1 2021.

Kingsbridge Estates are a major commercial developer who have been working on a number of schemes near the South Coast.

Chris Fry, Chief Executive of Kingsbridge, detailed their Concorde Park scheme, at Junction 9 of the M27, she said “We’re currently on site, developing just under 94,000 of space, these units will be available this summer.”

Kingsbridge are trying to build in well-being and sustainability into their schemes,  Fry explained “There’s a lot of focus on the work environment for office environment, but we really think there should be thought for people working in these sort of industrial units”.

Kingsbridge are looking for more sites in the region, keen to build on their pipeline

Housing association Aster Group  has recently signed a JV with Vistry Homes, to build over a 1000 new homes.

Sarah Knight, Head of New Business and Delivery, said of their mission to ensure that everyone can afford a home, she said: “It frightens me how much bigger that housing need has become over the past 20 years.”

Knight raised how affordability issues could exclude key workers for areas where they are needed, she said: “Say you live in a nice affluent area and then you learn that local primary school can’t even recruit a teacher because they can’t afford to live there”

Mike Shepherd, Director of Development at Vivid Homes, shared many of knights sentiments, and also emphasised their role as a “springboard for those looking for home ownership.”

Shepherd shared a number of schemes the association was involved in, he said: “First we have North Stoneham park in Eastley, its a green field development of around 1000 homes, it’s in a new parkland setting has new sports, education and community facilities.”

Vivid are also working on Goldsmith Avenue on Portsmouth, where they are developing a signature building of 70 affordable units, which Shepherd hoped would “kickstart regeneration in that part of Portsmouth.”

They are also working at Chapelgate in Basingstoke alongside Barratt Homes, where there are 26 acres of brownfield land available, and they have converted the former industrial white building into flats.

The South Coast is a genuinely exciting region for new development, from Waterside communities, to the homes of the future, and industrial buildings that challenge preconceptions, there are some truly unique and interesting development plans coming to the region.