The future of Student Living

In recent years, despite some challenging issues in relation to funding structures particularly, Student Living has continued to evolve and become an established asset class in its own right. This is further endorsed by the formation of the British Property Federation’s Student accommodation committee, which was established in 2013, to engage with central government directly on policy issues relating to Student Housing.

The higher education sector has made two interesting headlines recently;

Key drivers in this reduction are the substantial increase in fees and new immigration regulations. However, whilst this headline appears to be negative, it needs to be looked at in context. See graph below which illustrates international student numbers from HEFCE between 1981-2013. 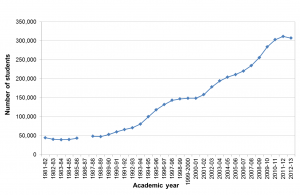 Universities’ contribution to economy increases by 24%. “According to Universities UK’s latest UK-wide study on the impact of the higher education sector on the UK economy, universities now generate £73 billion in output – up (24%) from £59 billion when the last study was published in 2009. This puts higher education ahead of many other UK sectors, including basic pharmaceuticals, air transport, advertising and market research, legal services and computer manufacturing.” Source: Universities UK 03/04/14.

A large number of Higher Education institutes are undertaking research, and placing a lot of emphasis, on their economic influence/ value; both in the context of the UK generally and on a local/ regional level. Universities have an increasing influence today on our city and the regional economies. Raising awareness of this fact is important for the public to understand more fully, particularly when considering Purpose Build Student Accommodation (PBSA) – and how important this is for cities.

In my view, Student Living remains a strong asset class which will continue to return strong yields for investors. However the market is incredibly competitive in all major University locations. This limits potential for future development somewhat, but opportunities do still exist.

The key to success is clearly driven by location. If a prime site becomes available and new good quality PBSA can be delivered in terms of Planning, funding, operator etc. then it will be viable. However as student numbers are relatively static, this will have a negative effect on poorer quality existing accommodation – especially in locations which are further away from the campus, resulting in some early 1st generation buildings facing problems. In terms of product specification, there seems to be a drive for both higher and basic/ smaller spec solutions, this is based on the majority of the market being ‘mid-range’.

One final though on student living revolves around supply chain delivery. Whilst construction work has been fairly consistent in student living, this has been in an otherwise quiet construction market over recent years. This is changing now, particularly with Residential activity increasing dramatically. This will result in pressure being placed on contractors to deliver, both in terms of material supplies and labour. One thing we know cannot change in delivering Student Living is the completion date.