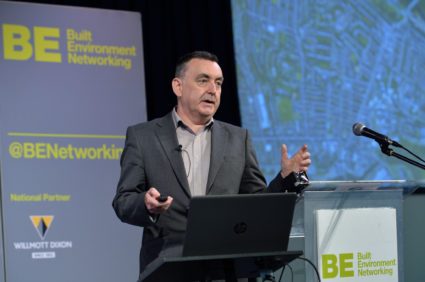 The University of Glasgow is looking to incorporate smart technology into their massive £1bn estate expansion plans.

The University is looking to move into disused Victorian hospital buildings, retrofitting them for modern purposes and building a new “economic innovation zone” around them. They are also looking to link Queen Elizabeth University Hospital, which is the largest hospital in Europe, into the city centre.

Burns announced that they were looking for a technology partner on the project: “We are about to appoint a Strategic Technology Partner to blend the traditional estate and IT services function within the university, into a new built environment model.”

Susan Halliwell, Director for Planning and Place at Oxfordshire County Council discussed their Connecting Oxford Programme, which aims to re-orientate transport in the city towards active travel.

Halliwell said: “We are looking to completely re-prioritise the road space in Oxford to enable much more cycling and walking, whilsy looking at a zero emissions zone. We’re already consulting on this with our communities.”

The University of Warwick is incorporating smart technology across their estate to meet their climate commitments. They have already made progress towards this goal according to their Head of Energy and Sustainability: “In terms of absolute carbon emissions, we’ve reduced them by 8%.”

Manchester City Council are also looking at ways of using smart technology to reduce their carbon emissions. They are developing a civic heat network according to Deputy Leader Cllr Nigel Murphy: “This heat network will heat many of our iconic buildings in the town centre, including the town hall and the Central Library as well as the central conference centre.”

DG:Cities is the London Borough of Greenwich Smart Cities division, which is funded commercially. Kim Smith, their Head of Smart Mobility, outlined their objective: “We look at how the technology can be added to the city for the benefit of the citizen.”

Smith raised how smart technology did not necessarily improve the lives of everyday people: “If we look at Uber in central London it’s actually ground the city to a halt.”

Smith also noted that electric cars posed spatial and logistical challenges: “There’s a movement to E-Vehicles, but there remains a challenge over the charging of these vehicles, which is incredibly challenging in an urban environment.”

Nott remarked however on the increased risk that 5G was bringing about: “One of the threats or vulnerabilities 5G throws up is unforeseen exposes to cybersecurity and the security and privacy in general, because the dynamic network 5G brings is not conducive to our current approach to securities, for example defence-in-depth techniques.”

Smart technology is here, and it is already changing things, and while it has shown itself to be a complicated force, raising negative externalities and big, still to be answered security and privacy concerns, it has also shown big potential to bring a whole raft of positive changes.