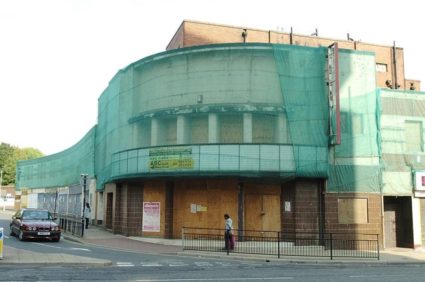 The former ABC Cinema in Wakefield’s city centre has become an eye-sore of late, and due to the private sector not bringing forward suitable plans for the site, the Council has now purchased this and they’re ‘exploring all options’ for the site.

In recent years Wakefield Council – who’re speaking at the West Yorkshire Development Conference – have been transforming the Kirkgate area of the city, firstly with an upgrade of the train station and then with developments around the former Chantry House and an impressive scheme next to The Hepworth which is moving forward. This is the latest in a line of purchases and projects aimed at regenerating the city. [emaillocker id=”71749″]

The art deco building is located at the bottom of the high street – where the city’s Cathedral also site – and it’s a known local landmark in the city. Having stood empty for over 20 years and plans are likely to be welcomed to those in the city.

Cllr Darren Byford, Cabinet Member for Economic Growth and Regeneration, said: “Kirkgate is a key gateway into the city and our regeneration plans will help to support additional investment in the city. The ABC building is an important part of the area and has been disused and derelict for many years. Unfortunately, private developers have been unable to supply suitable projects for the building. So we are pleased to have been able to obtain the building, after a delegated decision was taken in August, as we can now consider all the exciting prospects that this can bring in our redevelopment of the area.

He added: “We have been developing plans to regenerate the Kirkgate area and took the decision to purchase the property in August, with financial support from the Government’s Town Fund initiative so that all options for its future can be explored, and at the next stage we will be carrying out surveys on the site. A bid for further Government Towns Funding is being submitted shortly, which will influence how and when the Kirkgate area’s regeneration will progress.”

Also the council haven’t confirmed their plans a note in the council’s delegated decision register from August, when the building was purchased, highlights plans for the “acquisition and demolition of property at Kirkgate.”

To here more about the councils plans for the site you can attend the West Yorkshire Development Conference: https://www.built-environment-networking.com/event/west-yorkshire-economic-growth-conference-3-2/