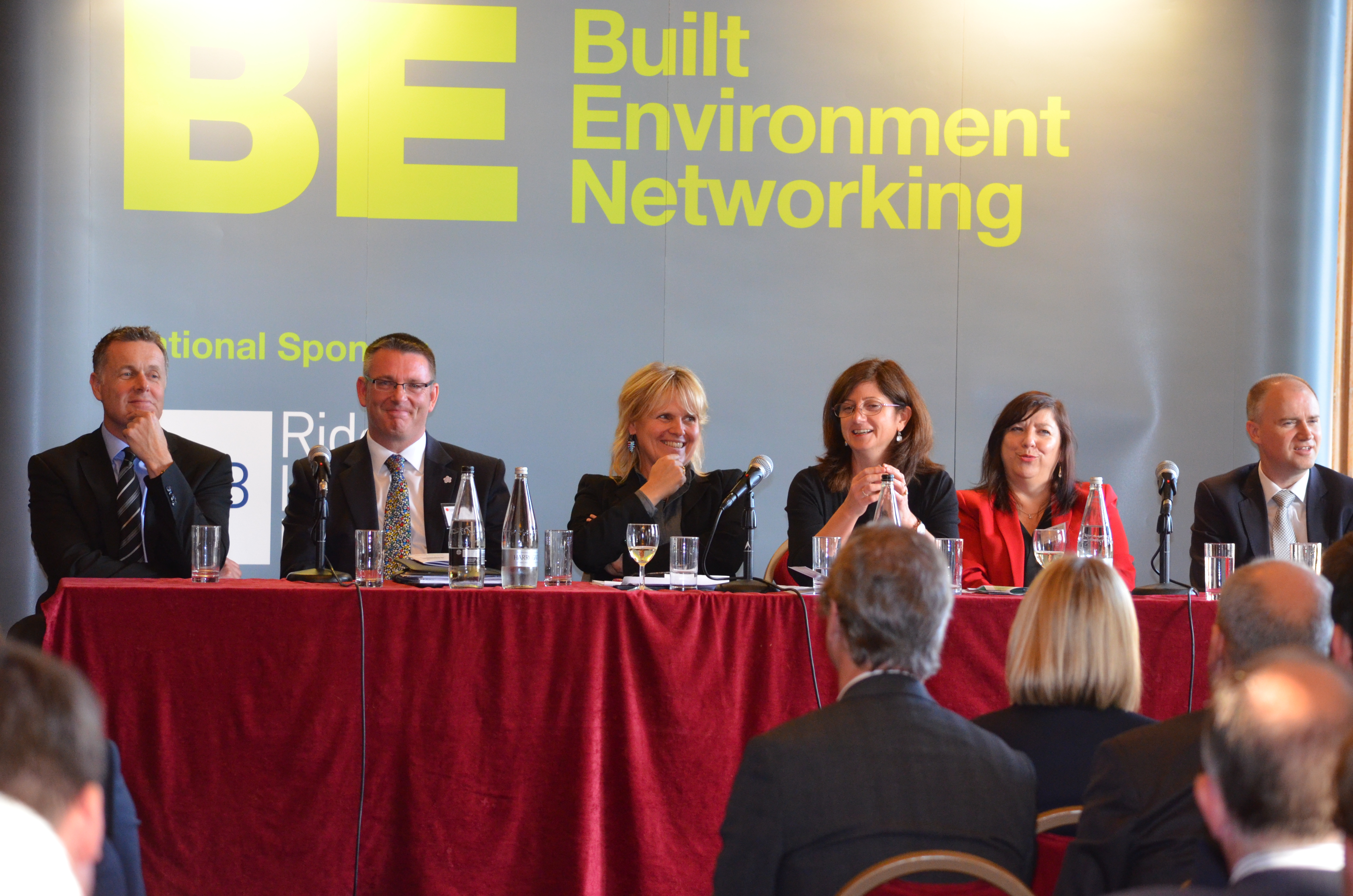 West Yorkshire council leaders have pledged to “seize the moment” to secure more devolved powers for the Leeds city region, as all the main political parties wrestle with the devolution issue after Scotland narrowly rejected independence

The chief executives of the six councils that formed the West Yorkshire Combined Authority (WYCA) in April – Leeds, Wakefield, Kirklees, Bradford, Calderdale and York – made an impassioned case for more devolved powers at a Built Environment Networking event at Leeds’ Civic Hall.

Tim Riordan, chief executive of Leeds City Council, said Leeds would be “at the centre” of various political pushes for devolution to the English regions, including Sir David Higgins’ forthcoming report on connecting cities to the HS2 network, Nick Clegg’s ‘Northern Futures’ campaign, and Ed Balls and Andrew Adonis’ detailed plans for devolution.

Riordan said: “I think two years ago it was Manchester alone making the pace, [but] we have made up ground and we have got to the point where we’re in active discussion with the government about further plans for devolution. We’re seizing that particular moment.

Riordan called for transport, housing and skills powers to be devolved, as well as the power to procure the north’s rail franchises, and said with further devolution WYCA could “in seven years be a net contributor to the exchequer [rather than a net beneficiary].”

He claimed the six member councils of WYCA had made £300m of savings this parliament “without unduly hitting frontline services” and their pay bill had gone down 12%, while “the Whitehall pay bill has gone up 6%”.

Riordan said: “We’re quite capable of running the transport, housing and skills agenda and in fact the only way we can tackle the deficit issue in the next parliament is by devolving more power, because Whitehall can’t do it.

“The opportunity is there. It’s not a case of if, it’s a case of when. You can be confident we’ll be among the first movers. We have the capability, the capacity and the partnerships. We’re ready to go – get behind us and get involved.”

“I think inevitably there’ll be new forms of government emerging,” Reeves said. “In terms of what form – that debate has to be had. But we need to be taking the lead in forming that rather than following.”

Joanne Roney, chief executive of Wakefield Council, and lead on skills for WYCA, said there was evidence devolved powers to help young people into training and work were more effective than central government efforts in this area and called for these powers to be extended. WYCA has reduced the proportion of young people not in education, employment or training (NEETs) from 23% to 5% in recent years

Merran McRae, chief executive of Calderdale Council, called for powers over housing policy to be devolved so housing policy can be set locally that is “better suited to the north”.

WYCA has powers in the fields of economic development and transport. It provides firms with a long term transport development pipeline for the region.

As well as the six council chief executives, three councillors and the leader of the West Yorkshire LEP sit on the board.

It has access to £1bn of central government funding over 30 years, providing it meets five yearly interim cost effectiveness targets.

“All of that is in planning and can be committed quickly,” Lythgo said. “But we have ambitions for the next round of devolution. We need a 22nd Century mass transit system. That doesn’t mean a tram or underground system, it would complement the things that are already here and connect them as fast as you can.

Lythgo said WYCA gives councils valuable collective powers: “It a allows us to work closer with Network Rail and Highways Agency, to work on developments that cover more than one area and to look at wider economic benefits where schemes cross boundaries.”

While it’s main powers are in transport, Lythgo said it can intervene in other areas: “There’s nothing it can’t do in conjunction with its partners.”

McRae says Calderdale is happy to throw its lot in with Leeds: “Leeds packs a punch, to be connected to that helps make the argument in terms of devolution to the north.”

Bradford’s Reeves agreed: “When I started in Bradford eight years ago I was told many times the problem with Bradford was it was too close to Leeds, to which my answer was, pardon my expression, bollocks. They couldn’t be close enough, they have a symbiotic economic relationship.

“We’re getting those parochial borders out of the way, and providing the conditions for growth.”

Kersten England, chief executive of City of York Council, agreed it made sense for the city to link up with Leeds: “Leeds is the hub but that doesn’t diminish York one jot.

“We are huge advocates of city regions. We think the future belongs to city states, with devolved powers and the ability to raise funds and make investments, like most cities in Western Europe. That’s where we want to take the agenda.”

England said York has skills shortages that could in part be met by improving transport links with other parts of the region, allowing more workers to commute into the city.

Leeds’ Riordan said WYCA is “a no brainer”. “Leeds has always done pretty well, but that success has been limited and I think its potential is limited, if we operate on our own.

“So the only way to operate effectively in the future is by working as a functional economic area, in terms of our labour market, housing market – operating across boundaries.”

Riordan said one area he hoped the WYCA would help address is Leeds’ “poor” productivity levels, caused by under-investment in transport.

He said: “Imagine a London style transport system across the region and you would transform the growth opportunities overnight, and that’s what we’ve got to achieve with this combined authority.

The council chief executives called on private firms to get involved with WYCA.

“You’ll never have a more pro-growth, pro-business set of chief executives and leaders than you’ve got at the moment, so there’s a great opportunity to get involved.”

Wakefield’s Roney urged firms to get involved in the WYCA’s skills agenda: “We want better engagement with private sector in terms of how we plug skills gaps. We’re talking to education providers, but we need the bit in the middle about getting businesses involved.”

York’s England said “we collectively need to bat for this geography” and asked private firms to help make the case for expanding York into the green belt: “We have controversial growth plans, to have [firms] alongside us enabling growth would be hugely beneficial. It would be hugely appreciated.”

Bradford’s Reeves highlighted housing: “the big thing is working with us through the planning system to deliver housing, as we’ve got a lot to do to deliver more units.”

Leeds’ Riordan said he would welcome private sector involvement in planning regeneration of Leeds’ south bank area and in current work by the authority on housing design standards: “We don’t wan that to chip at your viability, we want to build homes that stand the test of time.

“In Leeds alone we probably need 100 live schemes all being constructed at any one time.”