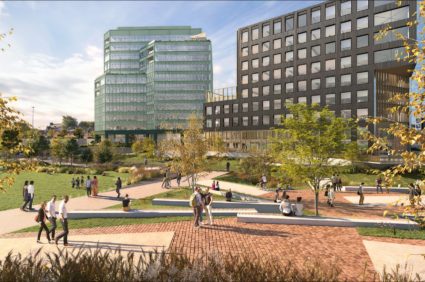 Pop-up street food. Underground raves. Hosting acts from Stormzy to ballet. A new part of Manchester is opening up following the start of an ambitious urban renewal project.

Mayfield, named for the former train station at its heart, like many parts of inner Manchester, is being restored after a period of urban blight.

James Heather , Development Director for U+I speaking at the Manchester Development Plans event described a district that had been left behind: “Its effectively a little Island site, relatively close to the city centre, is quite a forgotten part of Manchester.”

However this little known district, which only 4% of surveyed mancunians could identify, is going to be home to a £1.4bn regeneration, and new 10,000 jobs.

Creating a new park for the city,  Heather described: “The overall numbers for Mayfield we’ve got 3 and a half million sq ft that will probably go up, we’ve got 13, 14 acres of public realm,

Planners originally sought to level this historic part of the city, including the rail station but the development company disagreed, as Heather explained:“We’ve got the most astonishing heritage on mayfield, which was due to be demolished in the SRFs both in 2011 and when they were subsequently revised for the Whitehall North proposal in 2014.”

Birchwood Park is a major industrial estate, a former nuclear development site, it became part of the Warrington New town area, and now has a variety of occupiers.

They are undergoing a one million sq ft development plan, having recently invested £12m in five new warehouses. There are still three stages in planning, with vast amounts of green space land and there is planning permission granted for a new multi-story car park.

The park is owned and  operated in partnership by Pan-European fund manager Patrizia, Martin O’Rourke, their director of asset management, said of its success: “We have more 95% occupancy and 90% retention when it comes to lease renewal.”

Ensuring well-being for the around 5,000 people who work on the park is key to Patriza’s plans , O’Rourke explained:  “Well-being has become very much a buzzword, but we’ve been looking at for over 10 years,  we run classes in Yoga and meditation we have become almost the de facto outsourced well-being adviser for our occupiers.”

“We Strongly believe we need to cater for all kinds of people in Manchester”- This was the message of Michelle Rothwell, Managing Director of Watch This Space-  a market disrupting property regeneration and investment firm.

They are also developing a number of residential schemes, including one for seven three-bed townhouses on Richmond Street.

Packaged Living have partnered with major fund manager Invesco to deliver the £75m Aubrey Place Development in Milton Keynes which will provide 10,000 sq ft of amenities.

They have made a recent entry to the market in Manchester, with the purchase of a site on Haywood Street behind Piccadilly Station.

Ed Ellerington said of the appeal of Manchester real estate market:  “What’s always been the beauty of Manchester is the ambition shown, we’re already talking about 13,000 homes and 1m sq ft of commercial space backing onto Mayfield.”

Manchester’s neighbourhood are being given new energy by inspiring schemes both in their regeneration and how they create beautiful, interesting places to be.