This Event is not yet Sponsored 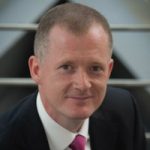 Colin is extensively experienced in the management of mixed-use property development and is the director responsible for the delivery of Science Central. He has worked as a property consultant for a number of private consultancies over the years, undertaking roles as a commercial property agent and valuer and has held several high-profile regeneration roles including senior development manager at Waterfront Edinburgh Ltd. On this project he led on the formation of the public sector Joint Venture which subsequently delivered the master plan for the regeneration of Edinburgh’s Waterfront at Granton.

In 2001 he joined a private sector joint venture between Taylor Woodrow and HBOS to redevelop the 19 acre site of the former Edinburgh Royal Infirmary in central Edinburgh, known as Quartermile. Working within an award-winning team which was subsequently taken over by the Gladedale Group, Colin played a significant role in the design, planning, procurement, marketing, sale and estate management of Quartermile, which is now a multi award-winning project regarded as a model for mixed-use urban development.

Tobyn Hughes studied Spanish, Portuguese and Latin American studies at Newcastle University, during which time he lived and worked in Spain.  He graduated in 1994.

After working as an IT programmer for British Airways in Newcastle for 18 months he moved to the commercial department in London where he worked for the following 12 years.  During that time his various roles in BA involved negotiating passenger transfer arrangements with other airlines, developing long haul pricing strategies and being responsible for annual revenue targets for part of the long haul network.

In 2007 Tobyn moved to Northumberland with his young family and took up the role at Nexus as Head of Strategy, later becoming Director of Customer Services and more recently Deputy Director General.  Over the five years at Nexus Tobyn has led customer focussed teams delivering services to 40 million Metro passengers per year, taken the POP card from creation to wide scale implementation and developed the Integrated Transport Authority (ITA) bus strategy that will transform the way bus services are managed in Tyne and Wear.

Graeme obtained a First Class Honours Degree from the University of Kent and a Master of Philosophy in Town and Country Planning from University College London. He started his career in planning at West Sussex County Council, where he participated in the RUCATSE (Runway Capacity to Serve the South East) project.

He joined the Airport in 1993 and since then has overseen the production of Newcastle’s first ever Masterplan and its subsequent review, as well as planning for all developments including a major terminal extension, hotel, control tower, fuel farm and filling station.  Graeme also instigated an environmental strategy, and over the years has built up strong and varied relationships on behalf of the Airport at a national, regional and local level.

In recent years, Graeme has also taken on the role of media spokesman and drives the airport’s public affairs strategy. He was instrumental in the creation of the Newcastle Aviation Academy, a collaboration with Newcastle College and Kingston University, and is closely involved in work to improve the customer experience.

Graeme is also a member of CBI regional council, the board of NGI and Northumberland Tourism, and takes part in a range of discussions on regional transport issues.