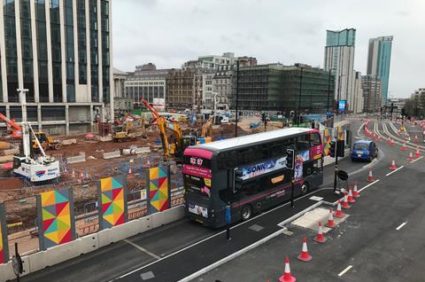 A residential tower being planned for the Paradise redevelopment in the middle of Birmingham will be close to 40 storeys,

The tower has been drawn up by local practice Glenn Howells Architects with proposals for the build-to-rent scheme set to go before city planners by the year end. It has been earmarked for a plot at the north of the site.

One Centenary Way is due to be completed in 2023, Argent will be discussing their plans at the upcoming Midlands Development Conference event.

Paradise had originally been conceived as a commercial and retail scheme but Rob Groves, regional director with Paradise developer Argent, said: “This proposed change to the Paradise masterplan will enable the development to become truly mixed-use.

“The demand for very high-quality residential buildings alongside places where people work and spend their leisure time is critical to the long-term success and sustainability of major cities like Birmingham.”

The first two office blocks at the city centre site have been built by Bam with financial services giant PwC currently moving 2,000 staff into One Chamberlain Square.

Bam took over the job, designed by Eric Parry Architects, from Carillion after its collapse more than two years ago.

Bam has all but finished Two Chamberlain Square, designed by Glenn Howells, with law firm DLA Piper due to move in later this year.

Glenn Howells is also behind a third scheme at the site, One Centenary Way, which is being developed at the old Adrian Boult Hall conservatoire building and is the first element of phase two of Paradise. This 13-storey building is being built by Sir Robert McAlpine and will finish in 2023.

The architect is behind two other high-rise towers in the city, a 42-storey build-to-rent block at 212 Broad Street being built by Sisk for Moda Living and a 37-storey private sales residential tower at Eastside Locks, near the planned HS2 station at Curzon Street. Developer on this scheme is Berkeley subsidiary St Joseph.