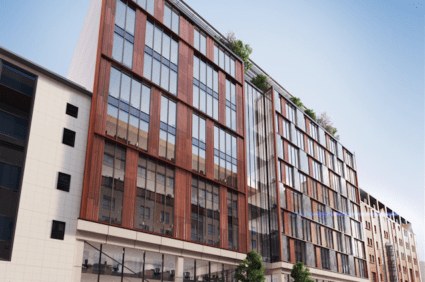 A £10m regeneration of Belfast Odyssey and an 11-storey office development have been given the thumbs up by Belfast City Council chiefs on Tuesday. The Odyssey will be transformed to include more than a dozen new bars and restaurants to create a vibrant atmosphere around the arena, whilst the 11-storey office and employment space will be created through the demolition of an existing city centre building – with a new impressive build put in its place.

We’re going to be hearing from Belfast City Council on the cities exciting developments and future opportunities and the Northern Ireland Development Plans Conference in September.

The 11-storey office development is set to see Oxford and Gloucester house buildings in the city centre being knocked down, with the new ‘Paper Exchange’ building replacing it. The development is likely to create 100 jobs during the construction phase, which will run between 2018-2020, and house 1,500 workers once completed. The project will also include additional mixed uses including a car park, café and restaurant space. Developers Wirefox said the scheme was ‘one of the most exciting office developments in Northern Ireland in a decade, there is significant market interest and we look forward to getting work under way.”

The Odyssey Pavilion regeneration is set to transform the area around the arena – with hundreds of new jobs being created both during and after the £10m improvements. The regeneration will include a big revamp of the entrance and existing units, 16 bar and restaurant units, a health club and a climbing wall.

Developers Matagorda 2 said: ”We’re delighted to be able to rejuvenate the Pavilion, bringing it back to being a key component of Belfast’s leisure and entertainment offering. our objective is to improve the overall visual quality and tenant offering of the pavilion, making it more attractive and into a more user friendly destination. The approved plans also include a access deck bridge and a new front façade with the overall floorspace increased by around 2,000 sq m. The scheme will help in the ongoing and successful regeneration of the Titanic Quarter and drive additional footfall to this part of the city.”

Join us at the Northern Ireland Development Plans Conference to hear more about the exciting developments happening in Belfast and the rest of the city.