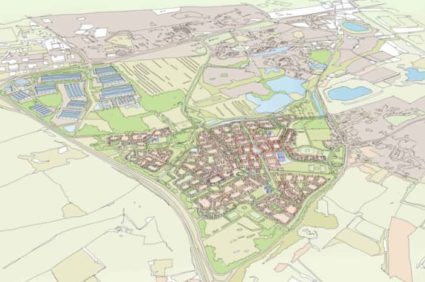 The announcement is positive news for the region – and a huge boost for housing targets in the region – as the development of new homes was initially delayed whilst developers finalised the £75 contributions to the project’s much needed infrastructure include the loop road.

The delay was discussed at a planning meeting in July with developers O&H Properties, Marlborough Oasis and Barratt Homes agreeing, in principle, for a solution. The solution would see O&H build the loop road through the development from Yaxley when Marlborough has built 500 homes, or by the second quarter of 2022 – whichever was later. The new cash injection by the government has seen the development unlocked with the developers funding £3.8m to be used to create the single carriageway road.

The new development will include:

Of the development Councillor Peter Hiller, Peterborough City Council’s Cabinet Member for Housing, Planning, Growth and Economy said: ”It’s fantastic news as the funding for the link road means we can now deliver a key new development to help meet the city’s growth ambitions. Peterborough is the fourth fastest growing city in the country and we’re actively working to meet high housing demand, consistently completing around 1,000 homes a year. Out emerging Local Plan sets a target of delivering over 21,000 homes by 2036, so it is crucial that we continue to build at a substantial rate. This specific development site has taken time to progress but now we can all look forward to seeing the completion of a major development which will benefit our residents for years to come.”

Construction is now expected to start on the infrastructure in 2019 and take around 12 months to complete.

To hear more about the exciting development from O&H Properties, Peterborough City Council and Greater Cambridgeshire & Greater Peterborough LEP then join us at the Peterborough Development Plans Conference.