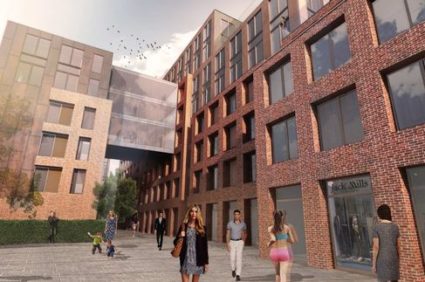 The City of Lincoln is set to see a boost in student accommodation numbers, as a deal is struck to bring 301-bedrooms to a Lincoln High Street site. The development, which will be based alongside the £25m ongoing project which will see new restaurants, shops and a gym, is now set to be completed by the end of 2019.

Lincoln is set to form a key part of our Lincolnshire Development Plans Conference later this year with the Council and University of Lincoln set to speak about the development plans and pipeline visions along with other speakers.

The development will include the erection of the main block which will run over 3 to 9 storeys which will house 250 of the bedrooms along with a gym, shops and restaurants – which will create a vibrant and energetic area in the heart of the city. The remainder of the housing will be within a second block which will include a six-storey block accommodating 51 beds, which will be connected to the other building through a footbridge.

One of the visions for the development is to provide a better connection between High Street and the University of Lincoln Campus, and the aim is to do this through the creation of a public footpath to ensure train barrier delays are avoided whilst making it quicker to commute on foot between the sites.

Corporate law firm Shulmans LLP have announced the completion of the deal on behalf on Blocwork LLP – the developer of the site, with the deal in excess of £25m. Kate Johnson, Associate in Shulmans Commercial Property team, said: It’s fantastic to see this level of investment in Lincoln. The contemporary, design-led scheme will meet the increasing demands for affordable, sociable and fully-furnished student accommodation. It will greatly enhance the current accommodation facilities of the University of Lincoln.”

We’re excited to hear an update on the project by the University of Lincoln at our Lincolnshire Development Plans Conference, whilst hearing other exciting estates and property projects they have ongoing and planned for the future.